Prabidhi Info › Info › What are the Postal Codes / PIN (ZIP) codes of Nepal? Why are they important? 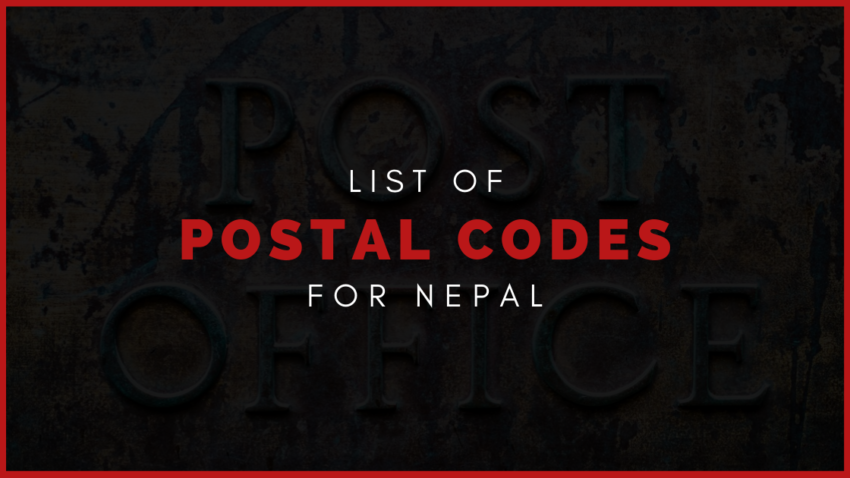 Postal Codes (also commonly called a PIN Code or ZIP code) are required when you are sending or receiving the parcel across the locations. Importantly, required during online shopping these days. Here we have prepared a complete list of postal codes of Nepal and briefed why are zip codes important and how to use them. Besides, because of immense confusion on how to enter a 6-digit postal code for Kathmandu, Nepal in Apple ID, we have also covered that topic.

What is the Postal Code (ZIP codes or PIN code)?

As per Wikipedia definition, postal codes are unique identifiers either series or combination of letters, digits, or even spaces and punctuation included in the postal address with a purpose to make mail sorting easy. The postal codes are named differently depending upon the country. In India, postal codes are known as PIN, which stands for Postal Index Number, commonly called a PIN code. Similarly, in the US and the Philippines, the postal codes are termed as ZIP code, where the ZIP is the acronym form of Zone Improvement Plan. And in Nepal, it’s simply called Postal Code.

When were the ZIP (PIN) codes introduced in Nepal?

Postal codes were first introduced circa 1860 to ease the sorting process and alleviate the complexity of the parcel delivery. But the actual adoption was pushed during World War I when the larger European cities started using it. However, the modern postcodes as we know of were first initiated by USSR in 1932 and followed by Germany in 1941. This led Singapore to use it in 1950, Argentina in 1958, the US in 1963, the UK in 1974, and so on.

But for Nepal, it took the late 1990s to implement the postal codes into the postal services.

For the detailed postal code of Nepal, please refer to the table down below.

Why are PIN Codes (ZIP Code) so important?

Postal codes (ZIP code) are not something Nepali often use. But the postal codes are one of the most important parts to use when you are sending or receiving couriers. The postal codes help the mailmen to speed up the sorting and delivery process for your courier to the right address. For example, in a large city, there might be a street with similar or identical names, and in those cases, without correct postal codes (ZIP codes) delivering parcel could be difficult.

These days postal codes have become well-known or subject for curiosity in youths because of the increasing adoption of technology and growth in online shopping habits.

How do you use Postal Codes (ZIP Code) for Nepal while online shopping on Aliexpress, Amazon, or Gearbest?

Before you learn how to use postal codes for Nepal while shopping online on Aliexpress, Amazon or any other, here’s what the digits signify in the ZIP codes.

For example, let’s take a postal code for Kathmandu, which is 44600.

For another example, let’s take a postal code for Pokhara, which is 33700.

Now here’s how to use the postal code (ZIP codes) for Nepal in the address format.

What to enter in Postal Code of Nepal (Kathmandu) for Apple ID?

Apple ID is the first thing to set up on any Apple products, be it an iPhone, an iPad or MacBook. But sometimes, creating something as easy as an Apple ID can get difficult for Nepali because of the restrictions and other different factors.

But there’s a way around for this issue, just follow the below steps.

For 6 digit Postal Code for Nepal in Apple ID:

While entering the 6-digit postal code for Nepal in Apple ID form, take any postal code of your city and add a “0” in front of it.

For example: If you are entering a 6-digit postal code for Kathmandu, Nepal in Apple ID form, enter “044600” in the postal code field box, where “44600” is postal code of Kathmandu.

For 9-digit Phone Number for Nepal in Apple ID:

One comment on “What are the Postal Codes / PIN (ZIP) codes of Nepal? Why are they important?”