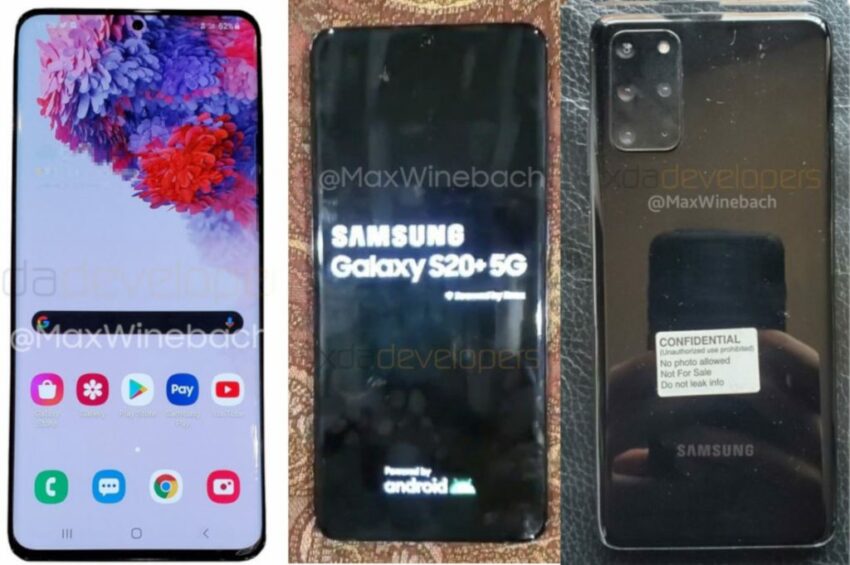 At the Samsung Unpacked Event, Samsung will be launching its next flagships line up phones which will be predecessors to the Galaxy S10 series, but the thing is it won’t be called or named Galaxy S11, but it we known as Galaxy S20 instead. This year of 2020 may be the reason it will be named S20. Previously, we already got our hands on too few of the leaks about Galaxy S11 or S20 say now. This time around not just leaks but a tipster from XDA Developers named Max Weinbach leaked S20’s live images and confirmed that they were the final product.

At the first glance looking at the leaked images, we can see that there is no pill-shaped punch hole like its predecessors but instead has a punch hole in the top middle (Just like Note 10). The tipster even explained that the Infinity-O Super AMOLED display of these S20 series is not much curved but flatter than its predecessors. He followed by referring that Samsung has used 2.5D glass for the display in these phones and there are fewer buttons which means there will be only volume rockers and power buttons with no Bixby button.

5G network supportive models and plus versions could be powered by Snapdragon 865 chipset while other non-5G and non-plus or non-ultra-models could be powered by Samsung’s own Exynos 990 chipset. Looking at the images we can see that it is running on OneUI 2.0 which is likely to be based on the latest Android 10.0.

We can also see a Penta-rear camera setup at the images located at the top left corner of the phone. These 5 camera sensors can be the main sensor, ultra-wide sensor, macro sensor, telephoto sensor and lastly a depth field sensor backed by an LED flash. All these cameras are fitted into a rectangular shape like a camera module (Just like A71). The company logo is placed at the bottom middle just like all Samsung phones.

The tipster also said that he has more information on this device and has already got his hands into S20. He later added that he also has videos, so yeah, he could leak them as well very soon. So, Stay tuned with us and we will be updating to you regarding this topic.