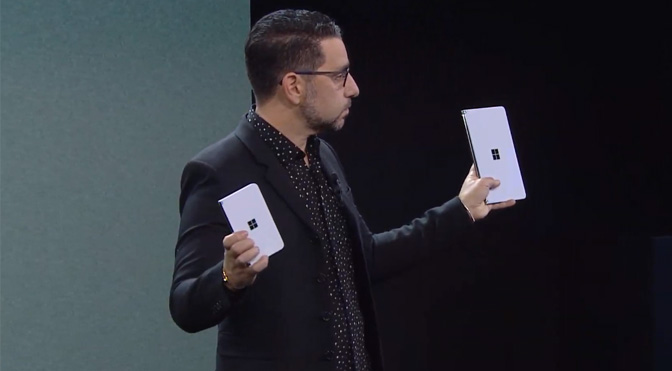 The Microsoft event took on Oct 2nd, 2019 in which they showed their next upcoming devices. We all knew a dual-screen device (2-in-1 tablet) will be unveiled but little did we know Microsoft was planning to make re-entry into the smartphone market. Just yesterday, Microsoft dropped two new dual-screen devices; Surface Duo “phone” and Surface Neo “tablet”. Before you excited and wonder how much these devices might cost, well, the prices aren’t official yet. And as for the shipment, these devices won’t make to the market until the 2020 holiday season!

The Surface Duo has dual 5.6-inch displays that get expanded to an 8.3-inch device.  The displays are not flexible but are connected with a 360-degree hinge that supports and connects these two displays. The hinges make opening and closing feel silky smooth and are not as awkward as other folding phones feel. The reason for Surface Duo not having a flexible screen but rather having two screens is that in two separate screens, it can run two separate tasks or apps.

This Surface Duo can also be put into landscape mode which allows another display to be used as a keyboard or game controller for gaming. To deliver performance the Surface Pro is powered by a Snapdragon 855 processor, so we can expect some good performance from this innovative device. The Duo runs on Android, but with a heavily skinned Microsoft own touch. Other than that, just looking at the photos we can say that the quality Surface Duo will provide will be top-notch.

Above is the official video from Microsoft which shows us Surface Duo’s compatibility, portability, and design. Microsoft has high hopes with this dual-screen device, so let’s hope that it won’t disappoint us.

The Surface Neo was also announced along with Surface Duo and other Surface devices. Alike Surface Duo it will also have two screens of 9-inch, which is slightly larger than Surface Duo’s 5.6-inch. Its dual-screen is also connected with a 360-degree hinge just like Surface Duos. This dual-screen is protected from scratches and marks with Gorilla Glass. It also has a detachable keyboard and stylus pen which attaches magnetically in Surface Neo. Both of these keyboard and stylus pen can be charged automatically through when attached to Surface Neo.

To deliver performance, it is equipped with an all-new Intel Lakefield processor which is known as a hybrid CPU and 11th Generation Intel graphics. The Surface Neo can also operate two separate tasks on two separate screens just like Surface Duo. In fact, the Surface Neo is a bigger version of the Duo, except for the fact, the Neo runs on the new optimized Windows 10X.

Above is the official video from Microsoft which shows us Surface Neo’s compatibility, portability, and design. Microsoft has high hopes with this dual-screen device, so let’s hope that it won’t disappoint us.