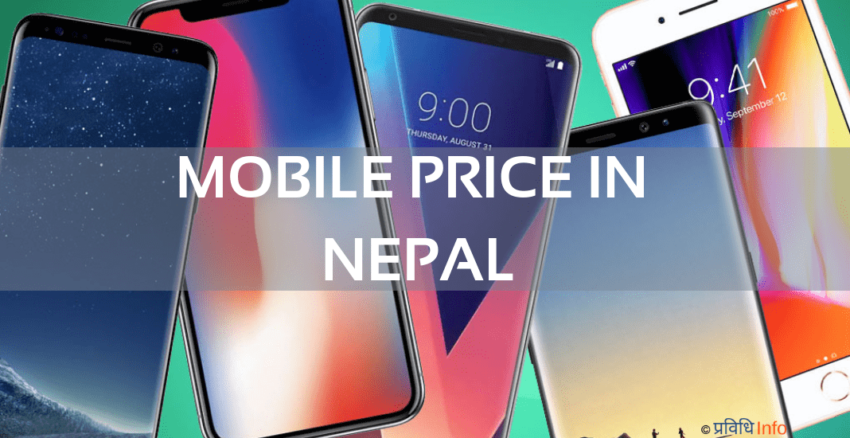 This list of “Mobile Price in Nepal” is completely updated on Jan 2020. The newly released mobile phones prices are marked as “New”. You can Ctrl+F to find the prices of those new phones quickly and easily.

It’s not been long when phones used to be small, palm-sized and dumb, however, in these last few years, the growth of mobile phones in the world has been huge. And seeing the current status of the growing smartphone market, Nepal doesn’t seem to fall behind and is here to join the smartphone revolution along with the world.

Looking at the Nepal Smartphone market, there are already tons of the smartphones sold from entry-level ranged to flagship-level. The high-end, pricey smartphones from giants like Apple and Samsung too are becoming the choice of Nepalis. However, the mid-range smartphones from Xiaomi, Huawei, and Samsung has become a perfect companion for most of the Nepalis.

And to make the easy go-to place for exploring the mobile price in Nepal, here we have compiled [regularly updated] the price list of the mobile phones available in Nepal.

Samsung is the leading smartphone manufacturer in the world, and it won’t be any mistake to point, Samsung reigns the Nepali Smartphone Industry too. Samsung manufactures all range of smartphones; entry-level, mid-range and high-end flagships. And like as said earlier, mid-range smartphones tend to make more sales from Samsung.

iPhone, by Apple, is one of the top smartphone brands in the world. From the Q3 2018 statistics by IDC, Apple covers 13.3% of the smartphone market. In Nepal, Apple products; iPhones, are officially sold and distributed by Oliz Store.

Topping the Apple markets, Huawei is currently sitting at the second spot below Samsung with a market share of 14.6%.

Huawei Mobile phones are widely appreciated in Nepal too.

Established in 2013, Honor mobile phones are the sub-brand of Huawei. Honor mobile phones have become successful in branding themselves as budget online brands in China [and all over the world] by manufacturing and selling comparatively cheaper, affordable and within-budget smartphones.

First appeared in 2016, OPPO is officially distributed by Telecell Pvt. Ltd. However, OPPO has been in the smartphone business for the last 10 years and they are now leading smartphone brands occupying an 8.4% smartphone market in the world.

OPPO has become a massive hit in Nepal in these recent years after their sponsored reality show “Nepal Idol” turned out to be a sensational success.

Realme, once started as sub-brand of OPPO, has now been an independent smartphone vendor for a while now. In fact, Realme has grown to one of the top smartphone vendors. (Source: CounterPoint Research Smartphone Shipment Market Share 2019 Q2)

In Nepal, Jagdamba Mobiles operate as the authorized distributor for Realme mobiles, and though there are already new Realme smartphones, only four Realme devices are available in the Nepali market. Expecting the latest Realme mobiles such as Realme XT, Realme X, Realme 5 Pro, Realme 5, and Realme 3i might take some real time to enter in Nepali smartphone market.

OnePlus has always been a unique smartphone brand. OnePlus follow an aggressive marketing strategy somewhat very similar to that of Apple. The first smartphone OnePlus One by OnePlus paved their success path, which was launched for as low as US$299 with all the high-end specs. Since then they have been recognized as “Flagship Killer”.

OnePlus made its first debut in Nepal with OnePlus 3T and is officially distributed by iHub Pvt. Ltd.

Currently marketed and distributed by Apex Manokamana and Cellucity International Private Limited in Nepal, VIVO is one of the fastest-growing smartphone industry in the world.

Xiaomi is the fourth-largest smartphone vendor in the world. Xiaomi sells almost every smart-electronics category devices. Vatsal Impex Pvt. Ltd. as the Xiaomi distributor in Nepal, has launched more than 40 Xiaomi smartphones in Nepal.

With the sudden upswing in the adoption of Chinese mobile brands; Xiaomi, Huawei, OPPO, VIVO, ZTE, like every other company, Sony has suffered a lot too. Sony smartphones sales are doing poor business in attracting phone enthusiasts. However, with their new Xperia models, they’re trying as hard as they can to retain the top spot in the smartphone industry.

It’s no secret that Nokia, once, was the one to rule the mobile phone industry. But soon things turned against the Nokia when, the two giants as we know today, Android devices and iPhones came into play. However, Nokia has made a comeback when HMD Global took the command and adopted Android OS to their devices.

Lenovo smartphones sales are declining in the whole wide world, so is for Nepal too. Despite they are doing good business in other device sales; laptops, monitor, Lenovo Smartphones are struggling to make a difference.

UMiDIGI, formerly UMi, is a Chinese OEM brand situated in Shenzhen city of China. UMiDIGI first debuted in Nepal with a huge event by Vividtec Impex Pvt. Ltd. as a sole authorized distributor.

LAVA International and the Micromax, once, had the largest market share in Nepal. LAVA mobile phones were the first choice for cheap and affordable phones in countries like Nepal and India. However, since the rise of Xiaomi, Huawei and ZTE phones, their market has collapsed.

TECNO mobile phones are one of three mobile brands; Oraimo, ITEL and TECNO, operating under the “Transsion Holdings Company” hood and officially distributed by Mahalaxmi Mobile in Nepal.

Also, Check These Out: