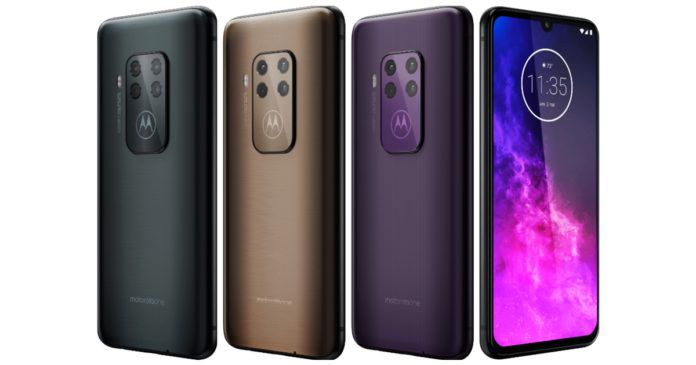 Motorola launched its new mid-range smartphone in September named Motorola One zoom which delivers flagship-like camera setup and image quality. The company claims that this phone can compete with the likes of OnePlus 7 Pro and Xiaomi Mi 9T Pro when it comes to the camera. This smartphone is targeted towards photographers as its main feature is cameras. The performance is not as good as expected but is decent. Motorola One Zoom price in Nepal would be around Rs. 52,000 as per our calculations.

Motorola One Zoom comes with a 6.39 inch Super AMOLED display which has a 1080×2340 resolution and is protected by Panda King glass. The display of this smartphone is very sharp, vibrant and bright which gives a really nice experience when gaming and watching videos. This display also holds an in-display fingerprint sensor and water-drop notch where its front camera sensor sits.

The front design of the Motorola One Zoom is normal but the backside of the phone has some unusual design. The portion where the quad-camera setup sits is kind of beefy and looks as if it is coming out, it’s very thick. The logo is placed at this portion which makes it look more unattractive. The portion is built from aluminum but Motorola One Zoom has also made it backside of the phone anti-fingerprint stain which is really good to have in a phone. The phone also is splash and dust resistant.

The highlight of this phone is its quad-camera setup.  This setup has a 48MP main sensor (Just like Oppo A9 2020), 16MP wide-angle sensor, 5MP depth field sensor, an 8MP telephoto lens all supported by a dual-LED flash. This setup is furthermore enhanced by Dual Optical System Stabilization.  This setup has 3x optical zoom and 10x hybrid zoom which is moreover enhanced by pixel binning which also improves its Night Vision mode results. This setup can record videos in 4k at 30fps and in 1080p at 60fps.

The water-drop notch holds the 25MP front camera with f/2.0 which produces really good images and is further improved by pixel binning. The image that this setup produces is really good and satisfying. This setup can record videos in 1080p at 30fps and in720p at 240fps.

To deliver performance, the Motorola One Zoom is equipped with 4GB RAM, Snapdragon 675 chipset and octa-core processor. Andreno 612 is placed at GPU to handle graphics. All this runs on Android 9.0 Pie. This setup is not impressive and gives an average performance. We can expect some heating or slow speed when doing heavy tasks or gaming.

As for storing data, installing games or apps, the Motorola One Zoom provides storage of 128GB which can be furthermore expanded to 512GB with the help of MicroSD card. It would have been better if Motorola One Zoom was released in different storage variants.

The smartphone is powered by a 4000mAh Li-Po battery which supports 15W Fast Battery Charging. As for the Connectivity, the phones come with a Type-C reversible connector and also a traditional headphone jack which is a plus. It provides all the common sensors.

Motorola One Zoom Price in Nepal

The price of this smartphone in India is Rs. 32,590 which comes in a mid-range segment. However, if this phone enters in Nepal’s market, Motorola One Zoom price in Nepal would be around Rs. 52,000 as per our calculations. But there are many phones under Rs 50,000 that worth the price. The smartphones comes in 3 color variants; Electric Gray, cosmic Purple and Brushed Bronze