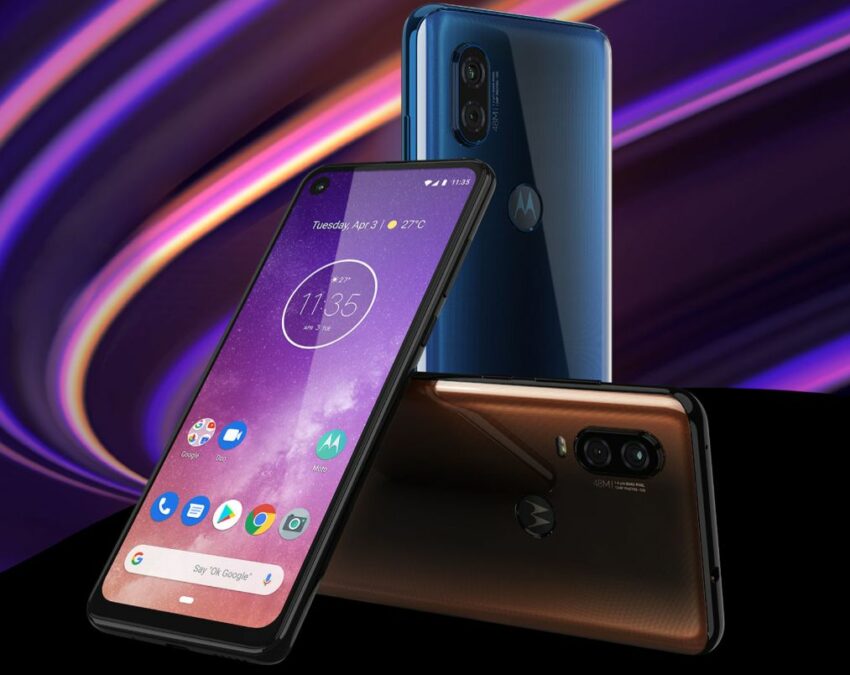 Motorola One Vision had been launched by Motorola in April 2019 to compete against other mid-range devices that offer more features than it should in that mid-range price tag. Motorola One Vision has a dual-camera setup which is placed vertically in the top-left corner of the phone at the back supported by an LED flash. It also has a hole-punch in its display which houses its 25MP camera sensor for selfie shooting. The front and backside of the smartphone are glass layered which gives it a shiny look. With Motorola One Vision, Motorola hopes to bully the budget smartphone market and change the perception of the budget smartphone in people’s eyes, minds, and views. This smartphone is also splash resistant and will come in three variants; 32GB/3GB RAM, 64GB/3GB RAM, and 128GB/4GB RAM. The Motorola One Vision price in Nepal should be around Rs 27,000 for a 4/128GB variant.

Motorola One Vision features a 6.3-inch IPS LCD display with a resolution of 1080 x 2520 pixels. The display gives quite good experience when watching videos. The contrast and color are really well managed and also is quite vibrant. This display also has a hole-punch which holds its selfie camera sensor. 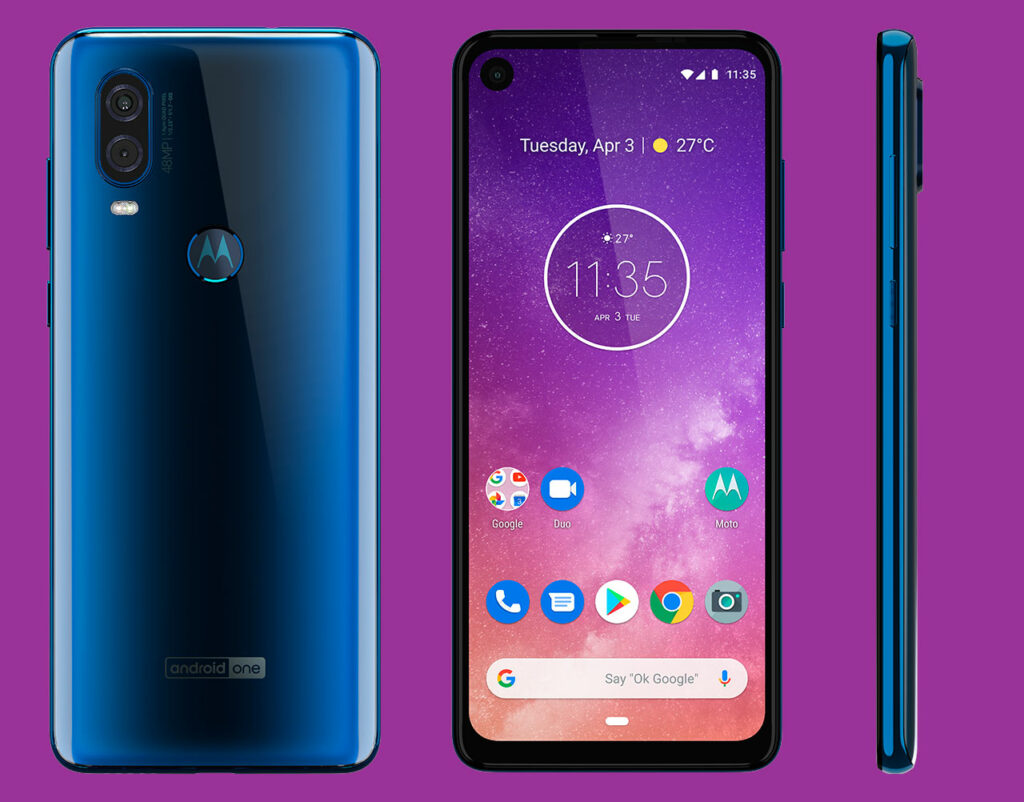 In this smartphone, Motorola has nearly achieved a bezel-less design which is really great. The design of Motorola One Vision is quite good and shiny which is appealing to eyes and really nice to hold. The front and backside of the phone has a shiny plastic frame and is layered with glass which gives it a shining and glossy finish. Surely it doesn’t feel as good as other premium phones but it doesn’t lower your expectation at this price point. It gives a really good and comfortable feeling while holding in hands. At the backside, it has a dual-camera setup supported by an LED flash at the top-left corner of the phone and a fingerprint sensor in the middle which also has the company’s logo in it. Overall the design is quite good for its price.

Motorola brings a 48MP camera sensor (Samsung’s GM1) in this smartphone which is quite impressive to see in a budget smartphone.  The main camera is of 48MP with f/1.7 and the second is a 5MP depth field camera sensor with f/2.2. quite similar to what we’ve seen on Redmi Note 7 Pro. This dual camera is supported by an LED flash. Motorola has also added “Quad Pixel” technology in this smartphone which merges four pixels into a single large pixel which results in good photo quality. But Motorola One Vision is a terrible Night Mode performer because the photo that One vision produces in Night Mode is very noisy and has less detail; overall we can say that the performance of this dual camera setup is really average. If you are into photography, this phone isn’t for you. Coming at the front camera department, we have a 25MP camera sensor for selfie shooting housed in a hole-punch. This 25MP camera sensor does the job but in a decent way. It gives minimal skin smoothening and skin whitening while still saving skin details and textures.

Motorola One vision has the ability to record videos 4K videos at 30fps but has really poor stabilization but it can record a really good stabilized video in 1080p at 60fps which is a really good option to have in a budget smartphone. As for the front camera, it can record videos in 1080p at 30fps which will be enough for most of the people. Let’s say overall the performance of One Vision’s camera is average or decent.

Motorola One Vision runs on Android 9.0 Pie as its operating system with three years of upgrades because of it’s Android One program benefits (like Mi A3, Nokia 7.2, Nokia 4.2, Nokia 3.2 and Nokia 2.2) so, there is nothing to worry about system updates. For delivering performance it is equipped with Exynos 9609 chipset which is manufactured by Samsung. Exynos 9609 does the job really well in delivering performance and is backed up with 3GB or 4GB of RAM, 2.2GHz Octa-core processor and Mali-G72 handle the gaming department. From reports, the One Vision is acclaimed for good heat management while playing heavy games for hours which proves that it does the job really well when it comes to performance.

Coming in the storage department it comes in three storage variants; 64GB/3GB RAM, 64GB/4GB RAM, and 128GB/4GB RAM. The internal storage of One vision can be further extended to 1TB via microSD card slot so, there is nothing to worry about storage and performance in this budget phone.

Motorola One Vision is backed by a 3,500mAh battery for power. This 3,5000mAh can last up to a day in normal use and barely makes it through the day while playing intense graphic games. This battery comes with supportive Turbo Charging, which can charge 50% of 3,500mAh battery in just 30 mins. As for connectivity, it has a hybrid SIM tray with a MicroSD card slot for expanding storage. It also has a 3.5mm traditional audio jack for music support and has a USB Type-C port.

Motorola One Vision Price in Nepal

Motorola One vision in India is priced starting from INR 14,999 for 4/128GB. When it comes to the Nepali market, we expect the Motorola One Vision price in Nepal to be around NPR 27,000. This smartphone will come in two colors; the Sapphire gradient and the Bronze gradient. 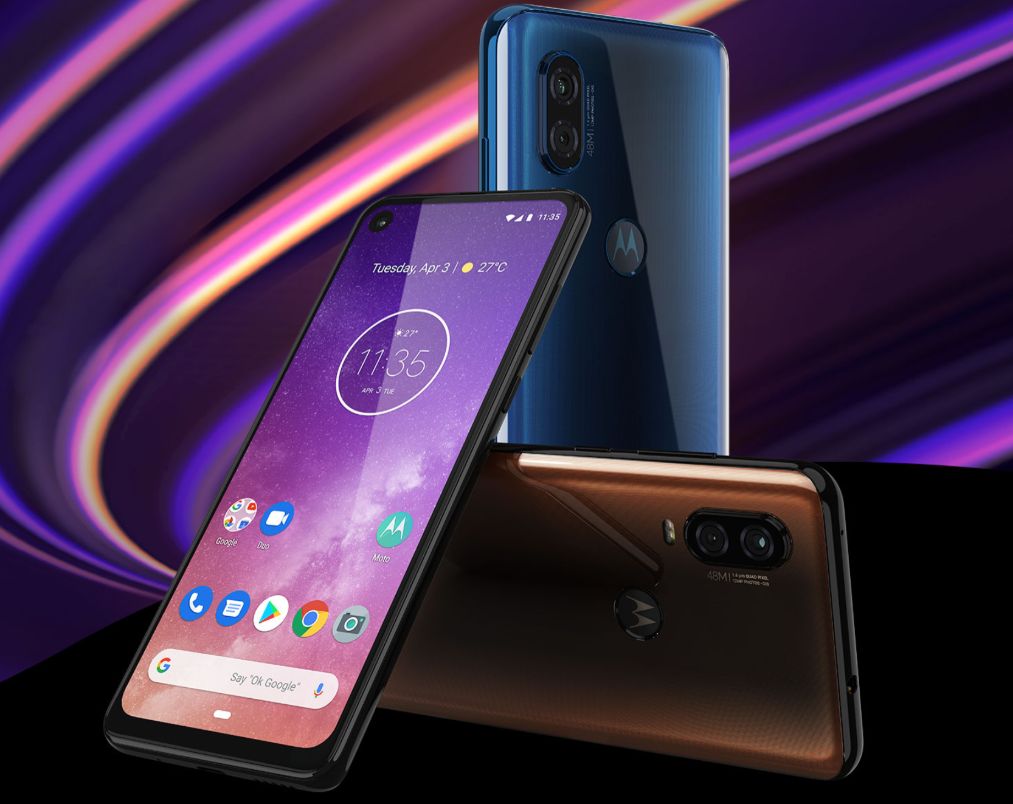