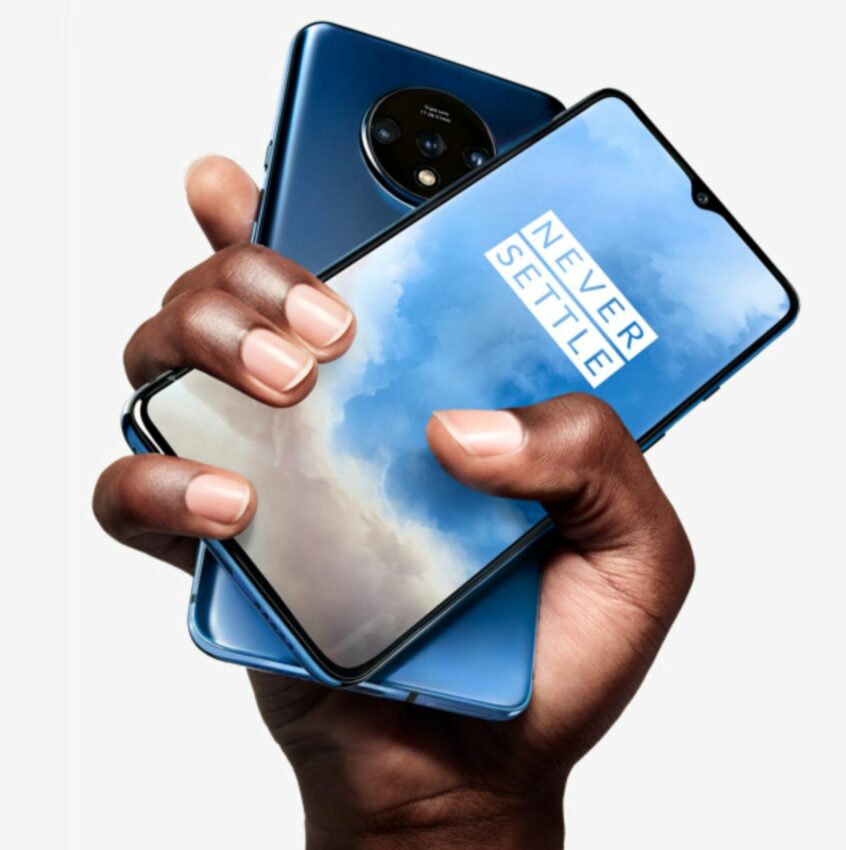 NEVER SETTLE! The mantra that OnePlus recites is what they really follow. Because OnePlus, setting aside all the leaks, teasers and rumors, they officially released their new iteration to OnePlus “T” family; OnePlus 7T. The 7T surely fills the gap that was in the OnePlus 7 and the OnePlus 7 Pro. The 7T evidently has substantial upgrades on all the aspects. In Nepal, OnePlus 7T price is Rs 66,999. For further more details on 7T let’s go through its features and specification.

OnePlus 7T looks fresh, dazzling, and all-around beautiful. 6.55-inches fluid AMOLED display with a 90Hz refresh rate is the prime attraction for 7T. It’s clear that 7T offers Galaxy Note 10 display quality on a budget. [Google Pixel 4 is rumored to have the same 90Hz display.] On the front, waterdrop notch confines 16MP selfie camera. This time around the waterdrop notch is shrunken down about 31%. This makes 7T display even more mesmerizing.

The 7T houses frosted gorilla glass on the back and aluminum frame. The volume keys are on the left and the power button is allocated on the right edge. There’s no sight of 3.5mm audio jack. The bottom edge has a type-C charging port alongside loudspeakers. In-display optical fingerprint sensor is embedded on the front. On the back, there’s a redesigned rounded camera module (like on Nokia 9, Nokia 7.2, Huawei Mate 30) with the horizontal triple camera setup. As for color options; the Frosted Silver and the Glacier Blue are the two color variants for the 7T. And both of them are appealing giving off a gradient-like sheen depending upon the angle the light hits.

The selfie camera is confined within the waterdrop notch. The 7T flaunts 16 MP, f/2.0, 25mm (wide). You can shoot videos: 1080p@30fps. Better quality portrait selfie can be taken with these. For the image stabilization, there is OIS and EIS. This gives better photography and videography experience.

OnePlus 7T is powered by Snapdragon 855+ (7 nm), the flagship SoC that is faster, smoother and more efficient. The top-tier processor powers the smoothness for an intensive game like PUBG and can go through all other heavy apps and games. Performance has never been something to worry about in the OnePlus series.

Right out of the box the 7T runs on Android 10 and OxygenOS (v10), making it one of the first phones to launch with Google’s latest Android. The 7T is paired with 8GB RAM with 128GB and 256GB storage variant. For the battery, there is an improvement, or in OnePlus’ language, a “turbo” upgrade. It’s fueled by a 3800mAh battery that comes with a new 30T Warp Charge and supports 30-Watt fast charging. Though both the 7 Pro and the 7T ships with 30W-rated fast-charging, OnePlus claims, the 7T has the fastest warp charge ever with 23% faster than the previous warp charge tech. This fully charged within an hour. That is insane. For security, the 7T supports face lock as well.

OnePlus is no more a “Flagship Killer” which it was initially acclaimed for. In fact, the OnePlus has itself become a premium flagship device, leaving the “budget flagship” tag behind. However, the 7T is still a feasible option to go against iPhone 11, Galaxy Note 10 Plus, or Huawei Mate 30.

OnePlus 7T has officially launched in Nepal. Globally, it was already available in India and other selected countries. The 6.55-inch fluid AMOLED display, Snapdragon 855+ chipset, 48MP triple rear camera setup, 38000mAh battery all packed under the OnePlus 7T hood is fascinating. The price of OnePlus 7T in Nepal is Rs 66,999 for the 8/128 variant. With all the great features and the specifications this top-tier device certainly gives more expensive devices a run for their money.