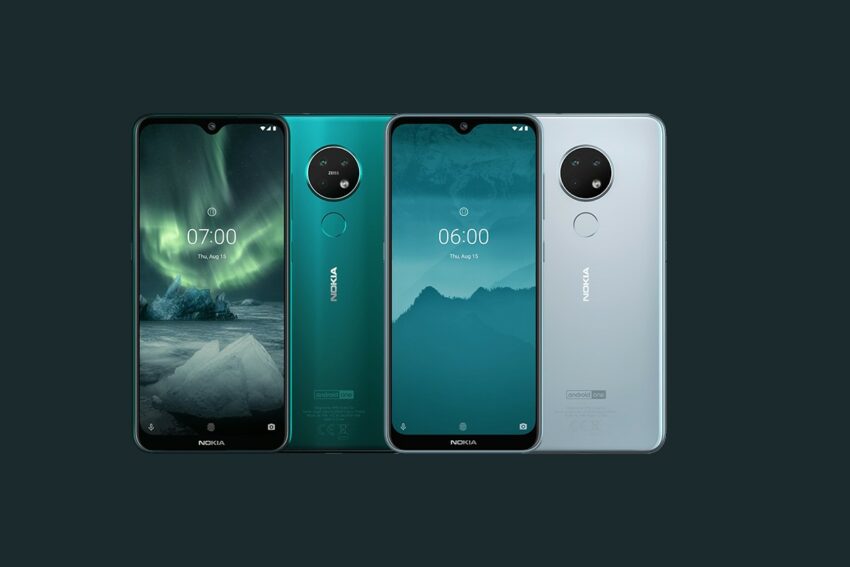 Nokia 7.2 smartphone was launched on 5th September 2019 (globally) which is the successor of last year’s Nokia 7.1. This phone includes a triple-lens camera, Snapdragon 660 SoC a glass build, metal body design, and a water-drop notch. It comes with Gorilla Glass 3 on the front and back and plastic frame. It also has a dedicated Google Assistant button at the side. Just recently, Sasto Deal exclusively launched the Nokia 7.2, and the price of Nokia 7.2 in Nepal is NPR 33,999. However, with an 11% straight discount code, the Nokia 7.2’s price drops down to NPR 23,999.

The Nokia 7.2 comes with a 6.3-inch FHD + Pure-Display screen with a water-drop notch and slimmer bezels. Pure-Display is a technology that has been used by HMD in phones like the Nokia 8.1 and on other smartphones previously. It can play SDR videos in HDR in real-time also.

Just like the old Nokia 7.1, its successor  Nokia 7.2 also gets a premium glass and metal design language. The phone comes with Gorilla Glass 3 on the front and back along with plastic frame in between. The glass rear panel gets a triple camera setup arranged in a circular module (seen on OnePlus 7T, Huawei Mate 30, Nokia 9) which is becoming a trend nowadays. Is also gets a dedicated Google Assistant button like every other recent Nokia phones; Nokia 4.2, Nokia 3.2, and Nokia 2.2.

The cameras have been upgraded with the Nokia 7.2 which now has a triple camera setup all arranged inside a circular module along with an LED flash. The system includes a 48MP with an f/1.79 aperture sensor that uses Samsung’s 48MP GM1 sensor for high-resolution photos along with a second 5MP wide-angle lens and third 8MP with an f/2.2 aperture depth sensor. A fingerprint scanner is set underneath the camera, with Nokia’s branding including below the circular module. As for the front camera department, it sports a 20MP camera with an f/2 aperture sensor that is housed by a water-drop notch.

Check Out: Nokia 9 PureView: a Penta-lens rear-camera setup, in-display fingerprint sensor, and whatnot

Portrait Mode shots are available both on the front camera and rear cameras and that feature has been enhanced furthermore with Zeiss. Zeiss Bokeh Styles have been added along with other various features like Swirl, Smooth, and Modern. There’s also a Night Mode integrated as a bonus.

The Nokia 7.2 comes with an octa-core Snapdragon 660 chipset with the choice of 4GB or 6GB of RAM, which should be plenty for most and an option of 64GB or 128GB of storage is similarly roomy, especially with the option of bolstering that with up to 512GB of MicroSD card. It is an Android One device that ships with stock and clean Android 9 Pie. HMD Global says the Nokia 7.2 is Android 10-ready and will be among the first devices to get updated to Android 10. It is part of Android One which means it will have regular security updates for 3 years, so there’s nothing to worry about software updates.

Nokia 7.2 houses a 3,5000mAh battery which hopefully provides a solid day’s power, and there’s support for Quick Charge 3.0 through the phone’s USB-C port. There’s no wireless charging, but that shouldn’t surprise you on a phone at this price.  It also has a traditional 3.5mm headphone jack, fingerprint sensor, and a Type-C port.

The Nokia 7.2 is currently available in India for INR 18,599 for the 64GB/4GB RAM variant and INR 19,599 for 64GB/6GB RAM variant. It comes in three color options; Cyan Green, Charcoal and Ice color options. The phone just arrived in the Nepali market, available in Charcoal Black color only. The price of Nokia 7.2 in Nepal without any discount is NPR 33,999 but the straight 11% discount on Sasto Deal brings the price down to NPR 23,999.