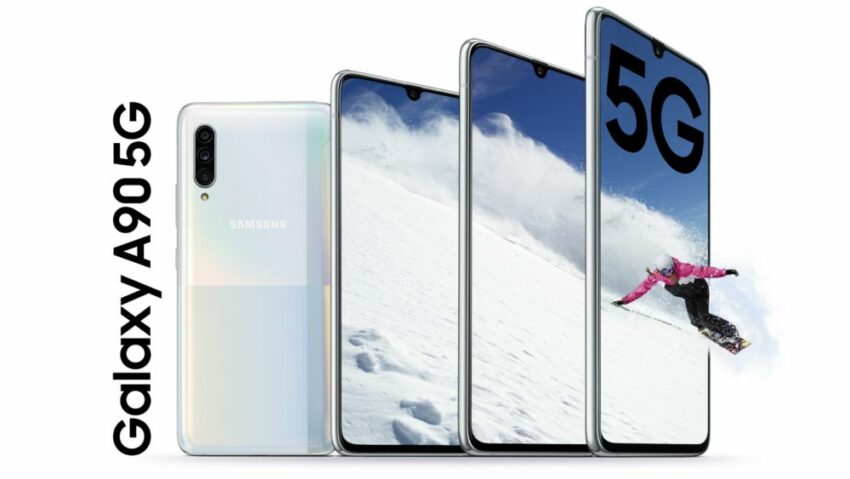 Samsung has been in the smartphone market race for a quite long time. Samsung always goes head to head with Apple and its products.  Samsung now has introduced its new 5G phone named as Samsung Galaxy A90 5G. The phone was launched in Korea on September 5 and in the UK on October 4. The smartphone looks quite good at first glance. The Samsung Galaxy A90 5G is yet to come to India but the rumored price of them will be above 60,000 which is almost Rs 95,000 in Nepal. So, we can say that the price of this 5G flagship in Nepal can start from Rs. 95,000 or 1 lakh. There are many good phones in Nepal under Rs 50,000 which worth’s the deal.

The Samsung Galaxy A90 5G comes with a 6.7-inch Super AMOLED display with a resolution of 1080×2400 pixels. The display also holds an in-display fingerprint sensor and a water-drop notch which houses its front camera for selfie shooting. The Super AMOLED display is very sharp, vibrant and bright which feels really good while playing games or watching videos.

The Samsung Galaxy A90 5G has a triple rear camera setup which is in trend right now.  The camera consists of three cameras; 48MP as the main sensor (Similar to Oppo A9 2020), 8MP ultra-wide-angle sensor and 5MP camera as a depth field sensor. This triple camera setup is aligned vertically at the top left backside of the phone which is supported by a bright LED flash that gets the work done in dark areas. This triple rear camera can record videos in 4k at 30fps, 1080p at 60fps and 720p at 960fps. The triple camera is supported by Optical Image Stabilization which helps to take better quality images.

Also, Do Read: Samsung’s galaxy fold sold out in just 30 minutes in India. What makes this so appealing?

Coming at the front camera department, the front camera has a 32MP camera sensor with an f/2.0 (Just like Z6 Pro). This sensor is capable of recording 1080p videos at 30fps. The images that this front camera setup produces are really good, vibrant and sharp. All round the camera experience in this flagship is really good.

To deliver performance the Samsung Galaxy A90 5G is equipped with Snapdragon 855 chipset and an octa-core processor. Adreno 640 is placed as a GPU to deliver high graphics work.  Combining all these specs with 6GB RAM or 8GB RAM and a Super AMOLED display can really give a good experience in gaming or watching videos. These all will run on Android 9.0 Pie skinned with Samsung’s own OneUI which is a really impressive UI. As for the sound, it has Dolby Atmos sound and active noise cancellation with a dedicated mic.

The Samsung A90 5G is powered by a 4500 mAh Li-Po battery (similar to Vivo Nex 3) which supports 25W Fast battery charging. The battery is impressively good ad can last up to a whole day. 25W fast charging can charge the phone quite fast and does its job really well.

For connectivity, Samsung A90 5G has a Type-C reversible connector but has excluded traditional 3.5mm headphone jack. It is a 5G compatible phone as its name suggests and has other sensors like in-display fingerprint sensor, accelerometer, gyro sensor, proximity sensor and Samsung DeX which lets your phone turn into a CPU and have a desktop experience.

The Samsung Galaxy A90 5G is yet to come to India but the rumored price of them will be above 60,000 which is almost Rs 95,000 in Nepal. So, we can say that the price of this 5G flagship in Nepal can start from Rs. 95,000 or 1 lakh. It will be available in 3 color variants; Angel Gold, Ghost White & Phantom Black. There are many good phones in Nepal under Rs 50,000 which worth’s the deal.