Microsoft is here with the new logo for its Chromium-based Edge browser. The new logo, however, looks like an “e” but its corresponding to the company’s policy for a “Fluent design” language. This update is a direct response to the company’s efforts to re-establish their status in the desktop browser segment.

The new icon was shown as part of a new surfing mini-game in Edge. It looks identical to the older version of Internet Explorer. But, the Edge Browser is not so relatable to Internet Explorer. As we know that the Microsoft is embracing Google’s Chromium open-source engine for the browser, the same web-rendering that powers the Highest Internet Browser Market Share, Google Chrome browser. Sooner or later Microsoft Edge will be powered by Blink and the V8 JavaScript engine. Joe Belfiore, Corporate Vice President of Windows says, “Ultimately, we want to make the web-experience better for many different audiences. People using Microsoft Edge will experience improved compatibility with all web sites while getting the best-possible battery life and hardware integration on all kinds of Windows devices.”

With the reports of Statcounter for Web browsers

Google Chrome is on the top, while Microsoft is on the 4th. But now as Microsoft Edge will be using the Chromium open-source, this ranking will be altered in the near future. For the Android app, the icon has not been updated yet. But once the desktop browsers are switched, android apps will be changed too. If you like you can download and use Microsoft Edge Beta. 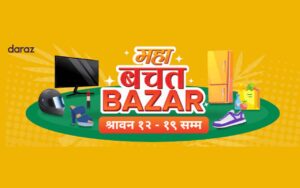 Daraz’s Mahabachat Bazar campaign starts, with up to 20% discount on shopping & chance to win an iPhone SE