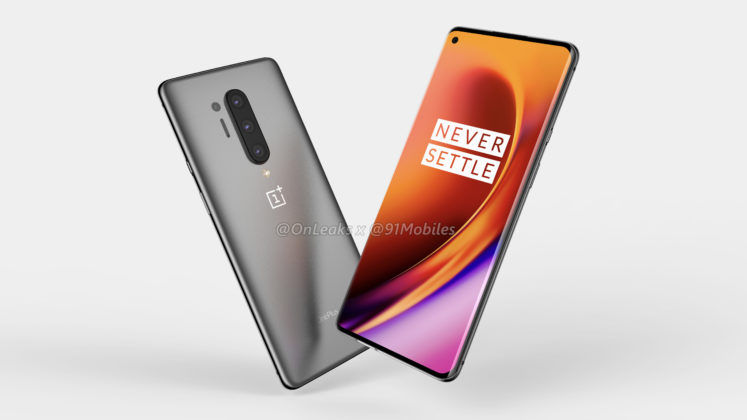 We are not even done with the release of OnePlus 7T Pro, the next flagship from the OnePlus, OnePlus 8 Pro is already making its news on the market. There’s a huge buzz right now and everyone is setting their eyes on OnePlus. With the help of 91mobiles alongside Onleaks, we have the leaks regarding the new flagship.

For the display, as per the OnePlus, we already know that the future devices from the OnePlus will have 90Hz display [similar to OnePlus7T], so definitely OnePlus 8 Pro will also have the same. According to the leak, this will be the first-ever OnePlus device to have the rear quad camera just like Samsung, Vivo, OPPO devices. Sad news for the lover of motorized pop-up camera lovers, this time there won’t be any on this Pro device, unlike OnePlus 7T Pro.

Rather than this will have a punch-hole display[similar to OnePlus 8]and also curve on the edges. On the back of the display, we have a triple rear camera aligned vertically alongside the 3D ToF sensor. An Alter Slider and power button are on the left edge and on the right, we have Volume keys. The bottom edge houses a USB Type-C charging port as usual. There’s nothing more on the camera specifications. For the storage variant, it is said to be 8/128 GB. From the leaks so far we can see that there’s not much of changes from its previous flagships. Let’s see what happens in the future. The expected price of OnePlus 8 Pro in India is INR 49,990. Stick with us for more updates for OnePlus 8 Pro.