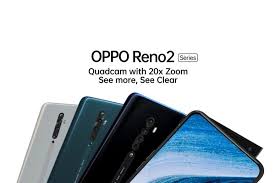 Oppo will be debuting the Oppo Reno Ace on October 10 in China and the company plans to launch their new Oppo Reno 2F at the same event. Oppo seems to be gearing up to set up into the smartphone market with these flagships which will go on head to head with other premium smartphones.

It has a 6.5-inch notch-less AMOLED display that produces a resolution of 1080 x 2340 pixels in which in-display fingerprint reader will be integrated. The smartphone could be featuring a pop-up front camera system for its 16MP front camera.

Also, as per TENAA listing, the back of the Oppo Reno 2F will be covered by glass featuring a vertical quad-camera system supported by a dual-LED flash. The quad-camera system will be fitted with a 48MP + 8MP + 2MP + 2MP lens. The flagship will also be packed with a 3,920 mAh minimum capacity battery that carries supported by 20W VOOC Flash Charge technology. The typical capacity of the flagship could be 4,000 mAh.

The smartphone is powered by an octa-core processor of 2.2 GHz along with 8GB of RAM, 128Gb of native capacity and also will be carrying support for MicroSD card. This smartphone will be loaded with Android 9 pie Operating system instead of the latest Android 10.

On the left edge side, there will be volume controlling buttons whereas on the right edge side, there will be a power button. This smartphone will be available in India which will be fueled by the MediaTek Helio P70 chipset. In India, it will be available in Sky white and Luminous Black color variants. Probably, the company may announce it alongside the Reno Ace smartphone on October 10 in China.