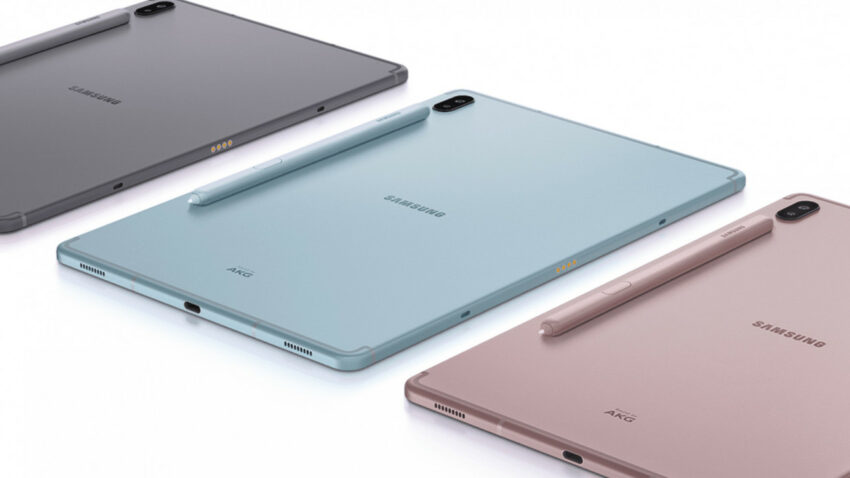 Samsung launched its Galaxy tab S6 in August 2019. Samsung is not just famous for making smartphones, Samsung makes various electronics as well as one of its most famous, portable and powerful series named Galaxy Tab. You guessed it right; Galaxy Tab is a series of Tablets made by Samsung. Samsung Galaxy Tab has been appreciated by its fans and Samsung has been improving its Galaxy tab series. This is the reason why Samsung has improved and packed Galaxy Tab S6 with features. Samsung Galaxy tab S6 price in Nepal could be Rs.95,000 or higher as per our speculations.

Samsung Galaxy Tab S6 comes with a 10.5-inch Super AMOLED display with a resolution of 1600x2560p. The display is quite large and while watching videos or movies, it gives the feeling as if we are watching on a laptop but the display is better than most of the laptops. The display is very clear, crisp, vibrant and well contrasted in colors. This amazing display also holds an in-display fingerprint scanning sensor to unlock the device and has glass protection. While in DeX mode, the Galaxy Tab S6 gives as much as a comfort laptop gives. The display is really good and large.

The design of the Samsung Galaxy tab S6 is really sleek. The powerful S6 tab has 5.7mm of thickness and weighs about 420g. The bezel at the front display is still out there but a little bit reduced than last year’s version. Slip BookCover Keyboard will also be there with users to add in the S6 Tab which will provide a PC-like experience. The back of the S6 Tab is aluminum build and features a dual-camera setup at the top left side of the phone aligned vertically. The S-Pen is attached just below the camera setup. The overall design is modern yet simple.

Samsung Galaxy tab S6 features a dual rear camera setup; 13MP main sensor and 5MP ultra-wide sensor. Tab S6 is Samsung’s first Tab to feature a dual-camera setup. Using Ultra-wide camera and smart AI can help to take better photos and with Adobe premiere Rush for Samsung, it’s very easy to create studio-quality videos and to edit it. This device records videos in 4K at 30fps. This Galaxy Tab 6 doesn’t feature an LED flash just like its predecessors to support the cameras on the device, but still, the photos and videos that the devices shoot is really impressive.

Coming to the front camera department, The Tab S6 sports an 8MP camera which takes really nice photos than expected. The video quality while having a video call is also really good. This front camera can record videos in 1080 at 30fps.

Samsung Galaxy Tab S6 is equipped with Snapdragon 855 chipset, Octa-core processor, Adreno 640 as GPU supported by 6GB of RAM up to 8GB RAM. All these runs on Android 9.0 Pie skinned with Samsung’s own One UI which can be updated to One UI 2.0. The Galaxy Tab S6 packs a processing power that brings next-generation specifications and lag-free gaming. Galaxy Tab S6 is designed and made to carry out heavy tasks, multi-task, studio works, video editing works, gaming and heavy application use.  The Galaxy Tab S6 comes in 2 storage variants; 6GB/128GB and 8GB/256GB which can be furthermore expanded up to 1TB via microSD card slot.

Samsung Galaxy S6 tab packs a mammoth 7040mAh battery which gives enough juice to power all the heavy tasks and gaming throughout the whole day. This battery supports 15W fast charging support which feels kind of not sufficient to juice up the mammoth battery at a fast speed.

BookCover Keyboard can be added to the Galaxy S6 Tab and pressing a dedicated key can be used for a quick switch to Samsung DeX mode which gives a PC-like experience. This keyboard also consists of a touchpad and an HDMI cable to connect another display for more space to work.

The S-Pen stays attached magnetically to the tablet right below the rear camera setup so users won’t forget it to take it with them. It gets charged when it’s attached so the S-Pen won’t be out of juice and always will be ready to use ASAP. The S-Pen can control drawing, take notes, control the camera and also can perform many shortcuts that users can also customize as per their wish. The S-Pen can prove to be very useful and important if the user is a regular note writer, graphic designer, artists or authors.

Samsung has equipped 4 Stereo speakers tuned by AKG with Dolby Atmos sound in 4 corner sides of the device, each one in each corner respectively. The four speakers provide immersive audio depth. The sound feels very rich, the tone and vocals are clear and the bass is felt enough. These 4 speakers combined with great display and specification Galaxy Tab S6 gives user a really nice experience while gaming, watching videos, recording videos, editing videos, multi-tasking, doing heavy works or doing any other thing.

In India, Samsung Galaxy Tab S6 is currently being sold at INR. 60,000 for 6GB/128GB variant. The other higher-end variant of Samsung Galaxy tab S6 is not available in India which means it will never reach the Nepal market. Samsung Galaxy tab S6 price in Nepal could be Rs.95,000 or higher as per our speculations. The color variants that will be available are Mountain Gray, Cloud Blue, and Rose Blush.