We all are familiar with Android OS because it’s free and easy to use, customizable and releases regular updates nature. But we have seen the problem with it too. Google, the developer of Android hasn’t been able to roll our security patches and OS updates to all the Android devices all at once, which Apple is pretty good at. Another problem Google is facing as it’s Prime OS is Chrome OS which is very bad to be considered as a desktop OS. But, Google has a fantasy to compete with iOS, macOS and Windows OS, to live up to that dream, something big needs to be built having multi-platform support.

Fuchsia, in general, a color combination of Pink and Purple is the dream of Google. Fuchsia OS is the solution to all the problems of Android and Chrome OS. An open-source OS based on Google’s own microkernel Zircon, written in Flutter SDK with languages like Dart, C, and C++ is the definition of Fuchsia OS. One of the prime goals of this OS is to bring Google eco-system under the same umbrella.

Fuchsia OS came to a sudden highlight when Google published a mysterious codebase in Github in August 2016. Though and official documentation wasn’t made that time, it was expected that Fuchsia OS holds a capability to run on universal devices, ranging from self-driving cars to smart toothbrush. This all was made because of the use of Zircon kernel, Android was based on modified Linux Kernal. But now, official documentation, released on fuchsia.dev by Google, shows that Google is more than serious to build this project.

The user interface and user experience will be better than the Android OS, the material design will be implemented in this OS. In 2017, UI named Arnadio was updated which was also written in Flutter SDK. 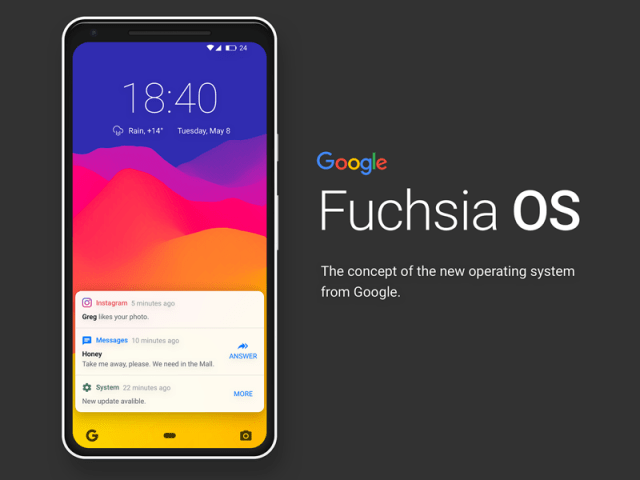 Since this OS is written in Flutter, there will be compatibility with cross-platform as in iOS and Android. Moreover, Google will be able to roll out all updates and security releases to all the devices at once.

Android was primarily developed focusing small devices and shows less portability high-end technology. In a sense, we can say that Android is limited to mobile phones and cameras. But Google is trying to build something better than Android, build sustainable support to Virtual Reality and Augmented Reality. So with Fuchsia, VR and AR will be on a focal point for Google. And to an extent to its, Zircon microkernel use will also ensure support to IoT too. It will also solve the seamless connectivity issue of Android.

According to one of the key developer of Fuchsia, “It is not a toy thing and might even take 2020 before it becomes a consumer product.”

So how excited are you about this new revolutionary Fuchsia OS. Will it be able to be as good as it says and replace Android from the market. Or, you wish to keep both Android and Fuchsia in the market. There is still time before it becomes a common name in tech-space until we can just make predictions and guesses.