Collision domain and Broadcast domain are some of the most confusing topics in the Computer Networking world for a beginner. This short and straightforward guide will be useful to all students preparing for academic exams and CCNA.

What is broadcast and when is it used in the network?
[ Definition of broadcast in Computer Network]

When a source host doesn’t know the information [MAC address, IP address, etc.] about the destination host, it will send a request to the special destination (broadcast MAC/IP) asking MAC address/ IP address of a particular destination host. This special address is called a broadcast address. And, when a message sent to this address, all the hosts on that network/domain will listen. This is called broadcast. When a message is broadcasted in a network, the particular host will reply with the required detail and others will ignore this message.

How many broadcast domains and Collison domains are there in 24 port switch with 2 VLAN?

A 24-port switch with no VLAN or default VLAN or single VLAN will have 1 broadcast domain and 24 collision domains.

Only the router interface and VLAN create a separate broadcast domain in the network.

Some scenarios to illustrate the broadcast in the network:

How a router transfers the packet to the destination host?

The host with IP 192.168.9.10 will respond back to that ARP request with his MAC address and the rest of the host will discard that request.

You can read more detail about ARP here or can watch a detail ARP video here.

How a DHCP client gets network detail (IP, DNS, Gateway) from the DHCP server?

When a computer (DHCP client) connects to the network for the first time, it will send a DHCP-discover message to all directly connected devices [to broadcast address 255.255.255.255 & FF:FF:FF:FF:FF:FF ]. Because, it doesn’t know the IP of the DHCP server (in order to get an IP, DNS server IP, Router IP, etc.). When the DHCP server gets this frame, it will respond to this client with network detail.
All the devices that receive this are connected by a hub or switches.

We hope this tutorial helps you to understand Collision domain and Broadcast Domain. If you are having any problem following this tutorial, please do let us know in the comments below. You can always reach us out at Prabidhi Info Facebook and Twitter for any tech-related support and queries! 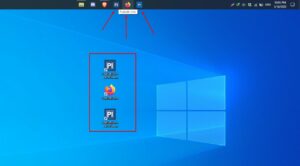