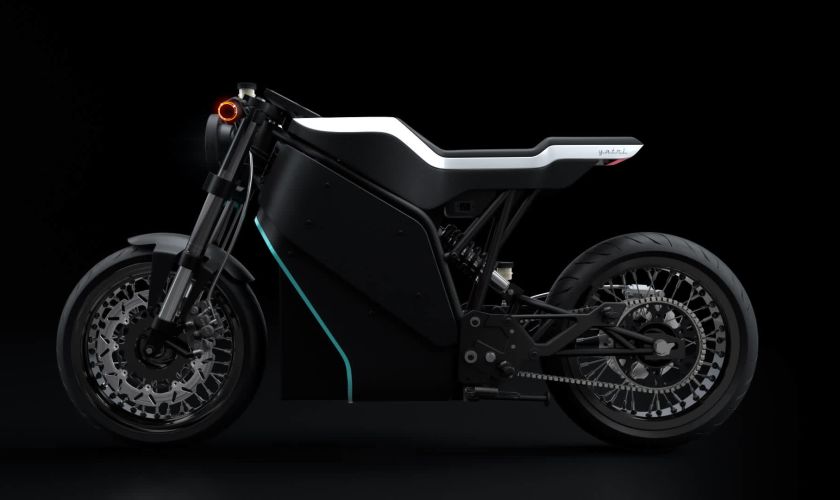 Yatri Motorcycles is a startup that was launched by a small team of six young Nepali engineers/entrepreneurs in Kathmandu in 2017. The company mainly focuses on electric vehicles, software development, research development, battery systems and more. They had been working for a long time now, since Dec 2017 on designing and producing a fully electric motorcycle model named Project Zero or P-0.

The design of P-0 feels really futuristic as if it is designed by Tesla, not Yatri. The sharp beautiful edges and the aggressive look made us think as if it was Tesla Cybertruck’s baby at first glance. The overall design of the P-0 is Café racer motorcycle based. The headlight is round and has dual-shock at the front and a mono-shock at the back for suspension support. The handle is very much like normal Café racer bikes and the side looking mirror glass is kept only on the right side.

“P-0 is Cybertruck’s baby, but from Yatri Motorcycles.”

Hydraulic Brake is also placed on the right side only and is absent on the left side. Disc-brakes are fitted at both front and back tires. The sock pocket, the chain, and the stand feel as if it’s from a regular bike running on gas. Red light at the end of each handlebar and at the tail feels very futuristic and gives the whole bike an aggressive look.

Overall the design of Yatri P-0 feels very futuristic and the finishing is really good. The material used to build the body and parts of P-0 hasn’t been revealed on the official website yet. However, as per Reddit comment, Ashim Pandey, founder of the company, confirmed P-0 has 100% of its bodywork done with carbon fiber. It feels as if this electric motorcycle had come out straight from a sci-fi movie.

Yatri P-0 is fully electric and runs on battery. The capacity of the battery is 6KWh and comes with 8 years of warranty. The company claims that this battery can power 30KW motor easily which is sported in the bike and can cover 230km of distance in a single charge. If the juice of battery suddenly drains out during a long ride then you can connect Yatri’s on-board charger to a standard wall outlet and charge the bike easily. As per Yatri, it would take 2hrs of time to 0-80% charge this motorcycle via standard wall outlet.

For interface, Yatri has fitted a 7-inch Full-HD display or a tablet so to call in between the handles where normal meter bars or speedometers are fitted on regular bikes. In addition to vital telemetry data and navigation, the display equips you with powerful insights like operating temperature, fuel cost savings and carbon offset contribution. Overall, the display feels very bright and does a good job even during bright sunny days. This implementation of the Full-HD display does a better job than normal meter indicators or TFT displays do. We can also see street maps and other information on this display.

Yatri has also integrated its own eco-system software; “Yatri Hub” which is designed to support and empower riders with real-time data to make sure riders are always connected to what matters to them most.

Yatri has really done an impressive job in building this awesome fully electric motorcycle. However, Yatri will face tough competition because Kathmandu is already filled with tons of bikes from companies like Bajaj, Yamaha, KTM, Royal Enfield, MV Agusta, Ducati and many more. The price of the Yatri Electric Motorcycle P-0 hasn’t been revealed yet but the company has promised to provide the bike in the lowest cost possible after the policy issues are resolved, till then the price of the Yatri P-0 electric motorcycle will stay a mystery.

“Project Zero is all about Challenging the Status Quo.”

The biggest concern of customers while buying this bike will be the lack of power stations in Kathmandu as well as all over in Nepal. But to keep these young innovators motivated, Saurabh Jyoti, director of Jyoti Group, booked the very first P-0.

The moment this bike will start selling will be a great moment for the whole country as it will take a step forward to clean energy-based transportation and inspiration for Nepali entrepreneurs as well as for youth enthusiastic innovators out there. Until then you can reserve and pre-order P-0 by writing to Yatri Motorcycles at reserve@yatrimotorcycles.com.

And as for the second question, the electric bike will be available in stores and showrooms after the open house in March 2020. Nevertheless, the good news is, Yatri Motorcycles’ will be revealing the pre-order booking price in about a week. So, you better be ready!