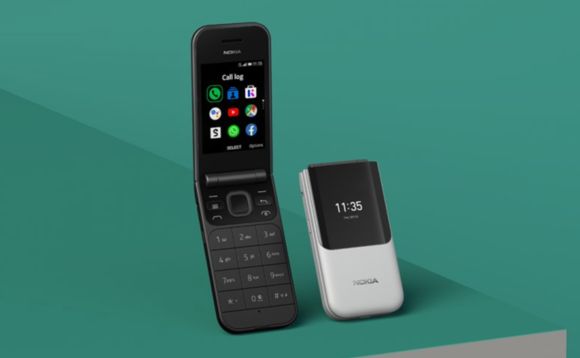 2020 is surely the year of futuristic phones and new tech innovations. You may think only phones will high-end specs or mid-range phones with great specs will launch in 2020, my friend you’re wrong. Nokia has just launched a Classic Flip Phone in China market and is on sale currently. You heard me right, it’s a Classic Flip Phone with no screen touch support or Android OS, it has keypads for typing just like old times. Nokia calls this phone “Nokia 2720”. It has been priced at 599 Yuan in China which is USD 85 so we can speculate that Nokia 2720 price in Nepal would be around Rs. 10,000 after it will be available in Nepal’s market.

Nokia 2720 comes with dual display. The main display is a 2.8-inches TFT with a resolution of 240x320p. The bezels around the display feel pretty thick and the hinge which helps the phone flip also looks pretty bulky at first glance. The second display is also a 1.3-inch TFT with a resolution of 240×240 located at the rear side of the phone. The display comes at the front while flipped and shows time and date. This display can also be used to read messages, check on notifications and a lot more.

Coming to the design, the design of this phone is pretty classic and the use of keypad for typing and dialing feels retro. At the between the display and the speaker, we can see a company logo. At the rear panel just below the second display, there is also a company logo. The back panel feels minimalistic and is kind of sleek and has a good finishing. Volume rockers are placed at the left edge whereas the emergency button and 3.5mm headphone jack are placed at the left edge just like modern Android phones. At the bottom edge, there is a micro USB 2.0 port as well for charging.

The camera isn’t the highlight of this phone here. The phone only has a single rear camera with a 2MP sensor supported by a flash. And yes, Nokia 2720 features no front camera.

Nokia 2720 equips Snapdragon 205 chipset, Dual-core processor, Adreno 304 as GPU and 512MB of RAM to deliver performance. It also has 4GB internal storage which can be further extended up to 32GB via microSD card slot. The phones do not run on Android OS but run on KaiOS. Nokia 2720 also comes with support to 4G Network and Wi-Fi. Nokia 2720 supports a few Google Apps like Google Maps and also has Kai App Store to download supported third-party apps.

Nokia 2720 packs Li-Ion 1500mAh battery to deliver power. This battery can last up to 28 days and can provide a stand by time up to 700hrs straight while in 3G on a single charge. You can juice the battery up after it drains through micro USB 2.0 connector.

Nokia 2720 Price in Nepal and Availability

It has been priced at 599 Yuan in China which is USD 85 so we can speculate that Nokia 2720 price in Nepal would be around Rs. 10,000 after it will be available in Nepal’s market. Currently, it is only available in China but in the future, it will surely expand its market. It comes in 3 color variants; Red, Black, Gray