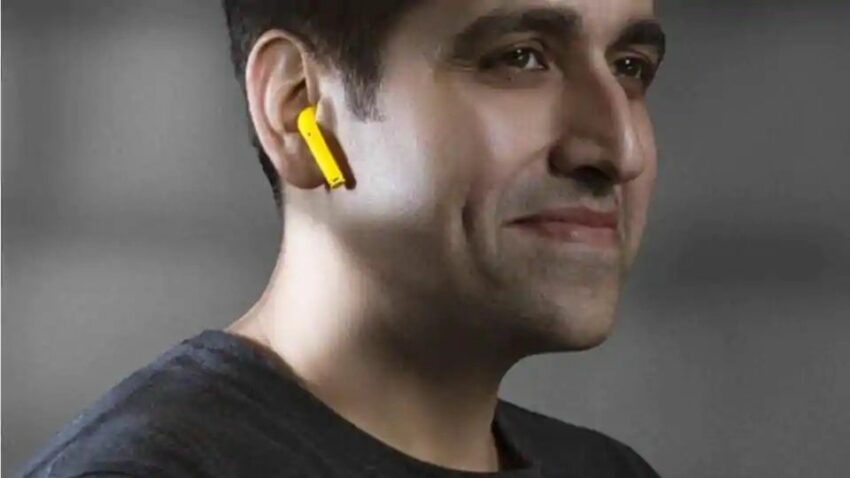 Its been just a couple of weeks since Realme launched its gaming-centric Narzo 10 and Narzo 10A smartphones in India. Now the company is back again with more new products. Realme in an online event held on May 25, 2020 unveiled different products —Realme Smart TV, Buds Air Neo, SmartWatch, and a Powerbank— of which price range from INR. 999 to 21,999.

Starting with the most expensive device of the bunch, Realme unveiled its Smart TV which aims to take on the likes of Xiaomi’s Mi TV in India. Since the launch, Mi TV has gained a lot of popularity and is one of the top smart TV in the country. To compete with Xiaomi, Realme has aggressively priced the product. The Realme TV 32-inch starts at IRS. 12,999 while the 43-inch variant is priced at IRS. 21,999. 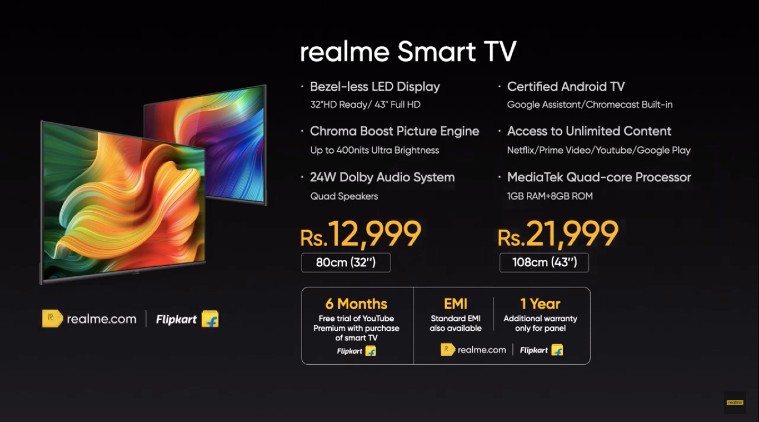 Both the smart TV’s are more or less the same, only the difference being the screen resolution. The smaller 32-inch Realme smart TV comes with the resolution of 1366×768 whereas the bigger 43-inch TV sports 1920×1080 resolution. As for the viewing experience is concerned, the bigger 43-inch TV would offer better results than the 32-inch one. Both the TV runs on Android 9.0 and is powered by a quad-core 64- bit architecture MediaTek processor. The TVs also houses a new Mali-470 MP3 GPU inside and the RAM used in it is clocked at  2133MHz.

The company claims that higher clocked RAM is much faster than the normal 1600MHz RAM found in other TVs in a similar price segment. The Realme Smart TVs are capable of HDR10 video decoding and can run “daily smart TV programs stably, smoothly and quickly, and provides strong performance guarantee for the picture quality.”

Both the TVs sport a bezel-less design with side bezels coming at just 8.7mm thin. Another big feature of the TV is the inclusion of 24W quad stereo speakers supporting Dolby Audio. The two sets of speakers are placed at the bottom of the TV in which each set of speakers includes one full-range speaker and one tweeter. Both sets of speakers are placed symmetrically for better left and right channel separation and more balanced listening experience. The company claims both the TVs can precisely reproduce the sound from 148Hz to 20,000 Hz, which almost cover all the frequency humans can hear. 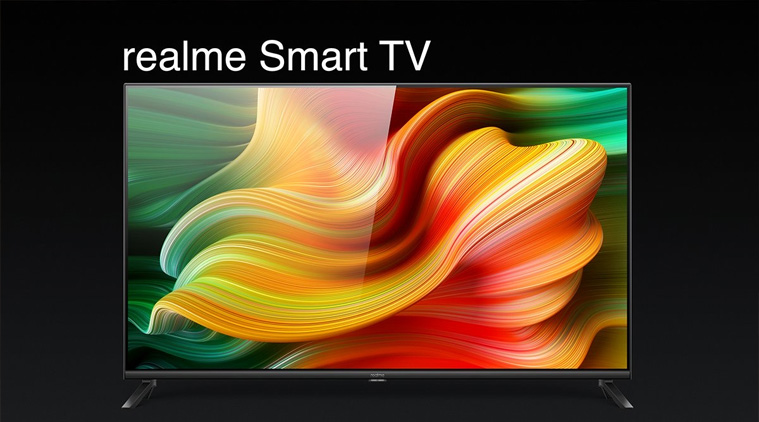 Being a smart TV, it is packed with popular streaming media platforms. Some notable platforms included are Netflix, YouTube, Prime Video, and Live Channel. If that’s not enough, users can download third-party apps like videos, music platforms, movies, and programs through the Play Store. The TV also has Chromecast feature built-in allowing the users to synchronize their phone’s content to watch on the TV.

I/O ports also are an important part of the TV and Realme TV comes with a good array of it. If anyone is unfamiliar with the term I/O ports, it is short for Input/Output ports that allow users to connect other devices like laptops, USBs, etc. Realme TV comes with 3 HDMI, 2 USB, SPDIF (optical fiber copper shaft, audio transmission interface), and DVB-T2 (Digital TV interface), Ethernet (network port) in the box.

Another thing that was unveiled in the event was the Realme Smart Watch. It is the first smartwatch by the company in the country is priced aggressively at INR. 3,999. Even at this price point, the smartwatch has many things to offer making this product praiseworthy. The smartwatch features all fitness features, heart rate monitor, mediation options, and many more.

Starting with the design, the Realme Watch comes with a 1.4-inch color touchscreen having a resolution of 320×320 pixels. Realme Watch features 320 nits of brightness which is bright enough even for sunny daylight. Users will be able to adjust the brightness of the watch according to once need directly in the watch. Users don’t have to take their phone out to adjust the brightness. Protecting the face of the watch is a 2.5D Corning Gorilla Glass 3 combined with a round frame.

The watch comes with 12 watch faces in-built the device capable of displaying six key data points to the user: time, date, weather, steps, heart rate, and calories. If users don’t fancy the built-in faces of the watch, they can download additional watch faces through the Realme Link app. But users might not have to worry about that as the company has confirmed to provide 100 more watch faces via an OTA update soon. 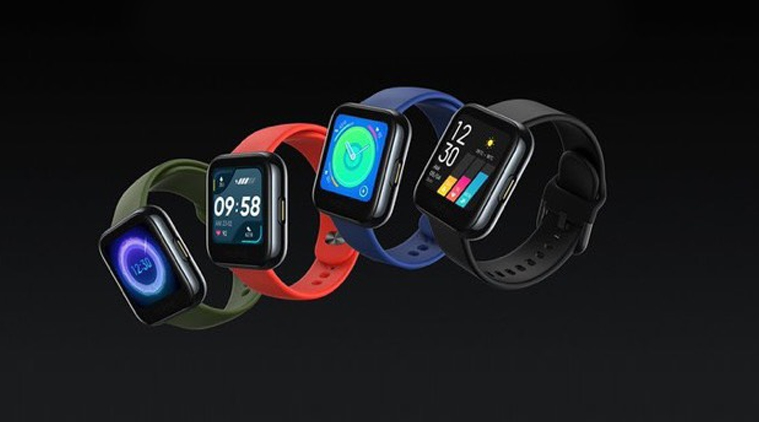 Smartwatches are considered the companion for your smartphone and Realme Watch is just that. The smartwatch comes with many smart features such as smart notifications, unlock the phone, take photos, and many more. The watch is capable of receiving almost all app notifications. It is also capable of automatically unlocking the user’s phone, play or pause music, and remote shutter for group photos.

Realme Smartwatch is IP68 water-resistant certified and is claimed to be rigorously tested. The watch is running on a custom version of Android and can run up to  7 to 9 days in a single charge or up to 20 days if it’s in power-saving mode.

The last product which was launched in the online event was the new Realme Powerbank 2. We nowadays highly rely on our smartphones. Even though our phones are good in maintaining battery life, sometimes one charging is not enough for a whole day. And there are situations where waiting for the phone to charge is not an option. Keeping that in mind, Realme has launched the Realme 10000mAh Power Bank 2.

As the name suggests, it has a capacity of 10,000 mAh and comes with many features. The powerbank 2 supports two-way quick charge technology which uses 18W to charge the user’s phone. The 18W two-way quick charging dual output ports are a USB Type-A and a USB Type-C. It also sports thirteen layers of circuit protection that improves safety when charging at high speeds. The Powerbank is also capable of USB-PD as well as Qualcomm’s QC 4.0. Not only that powerbank can also be fast-charged. 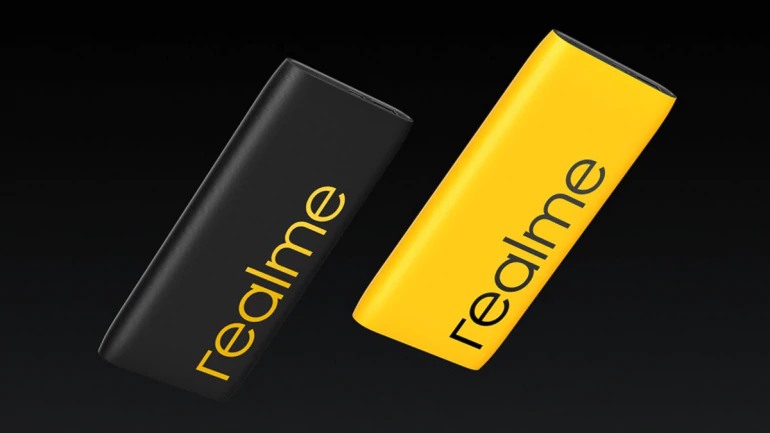 The Realme Powerbank 2 will be available in two color options: Black and Yellow. And as for the pricing, it is priced at INR. 999.