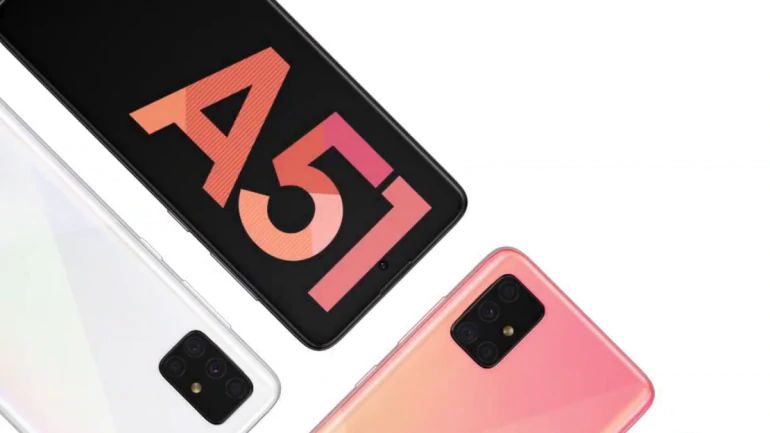 Samsung Galaxy A51 houses a Super AMOLED punch-hole display which Samsung calls “Infinity O display”.  The display has a resolution of 1080x2400p which also has a Cornering Gorilla Glass 3 layered protection which keeps the display safe from scratches, cracks and avoids getting shattered easily. The punch-hole is placed right at the top middle side of the display which is really tiny and small in size and also features an under-display fingerprint sensor. While watching videos, playing games and doing tasks, the tiny punch-hole doesn’t distract and is easy to ignore.

Coming to the design, the design at the back of the phone is completely refreshed and is finished with a really good-looking gradient color. The front side of the device feels alike Note 10 series and the phone is built with plastic. Back of the phone houses a quad-camera setup which is all fitted in an iPhone 11 series alike camera module. At the middle bottom, we can see a company logo, volume rockers and power button at the right edge and a 3.5mm traditional headphone jack, Type-C port and speaker grille at the bottom edge.

Samsung Galaxy comes with a 32MP, f/2.2 camera sensor fitted at the punch-hole as a front camera selfie shooter. It’s 32MP with an f/2.2 so we can say that the camera performance will be really good. This camera sensor can also shoot videos in 1080p at 30fps.

As for the rear camera, Samsung Galaxy A51 features a quad camera setup; 48MP main sensor, 12MP ultra-wide angle, 5MP macro, and another 5MP depth field sensor all supported by an LED flash. All these sensors and LED flash are fitted into the camera module which is found at the top left side of the phone. This setup can also record videos in 1080p at 30fps.

Samsung Galaxy A51 equips Exynos 9611 chipset, octa-core processor, Mali-G72 MP3 as GPU and 4GB/6GB/8GB of RAM which all runs on Android 9.0 Pie or Android 10 skinned with OneUI 2.0 to deliver performance. The phone also comes with a 64/128GB storage which can be further expanded up to 1TB via microSD card. To power the phone, Samsung has packed a 4000mAh Li-Po battery which also supports 15W fast charging support which is not fast enough but gets the job done. The phone also features a 3.5mm traditional headphone jack and Type-C port.

Samsung Galaxy A51 Price and Availability in Nepal

Samsung Galaxy A51 comes in 5 impressive color options; prism, Crush Black, White, Blue, and Pink whereas only 3 storage variant has been announced which are  4GB/64GB, 6GB/128GB and 8GB/128GB but the variant options can be further increased. The price of Galaxy A71 in Nepal is Rs 38,399. If you want to purchase a smartphone under Rs 40,000 please check out the article on Best smartphone to buy in Nepal under Rs 40,000.