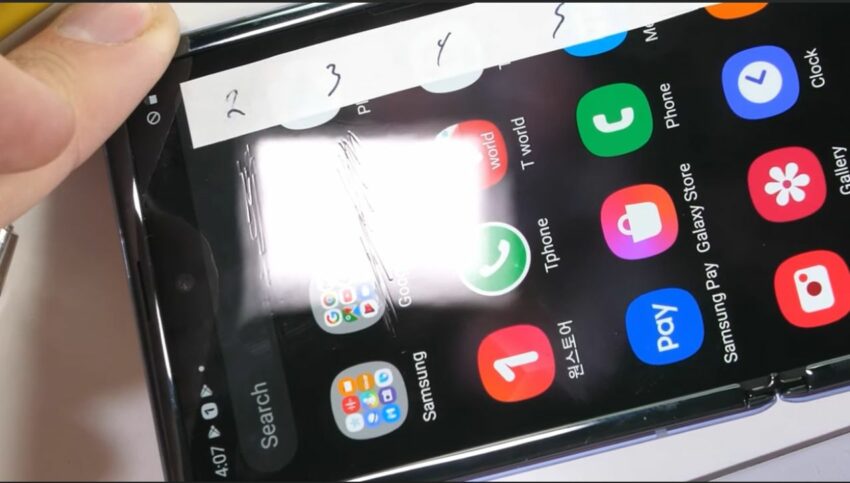 With the release of the Galaxy Z Flip, Samsung created a lot of buzz. It seemed as if Galaxy Z Flip was a revolution for a foldable phone. Strong and better hinge in the Galaxy Flip alongside glass foldable display (as stated by Samsung) was the major improvement from Galaxy Fold. The device looked promising during the Samsung unpacked event. When Samsung said that glass foldable display was used, everyone was surprised. But is that for real? Can glass be folded over again and again? Samsung also stated that the Galaxy Z Flip can withstand more than 200,000 folds.

On the official website, Samsung has description for the foldable glass display as below, “Meet the first-ever folding glass screen on a Galaxy. Yeah, we said folding glass. Made of Samsung Ultra-Thin Glass, it sets you up for an epic view with a smooth, flat screen.” But a smartphone company may state anything and it’s the users that need to test and figure out the real deal.

Following this, well-known tech YouTuber, JerryRigEverything performed his famous durability test on Galaxy Z Flip. For the scratch test, he uses different Mohs picks. Plastic scratches at level 2 or 3, Real glass scratches at level 5 or 6, Saphire at level 8 or 9and diamond at level 10. During the test, several marks were seen at the level 2 Mohs pick followed by deeper grooves at level 3 (similar to Motorola Razr). But isn’t level 2 and 3 for plastic?

If it is plastic then Samsung should simply say its plastic and if its real glass then only say glass. Previously, Motorola also said that Razr can withstand 100,000 folds. But the test results from CNET was not amusing. For the full story, please read, Motorola Razr will last for a year only, CNET folding test reveals.

So, what do you think of the Samsung Galaxy Z Flip? Is Samsung lying to its customers? Is Galaxy Z Flip worth $1,380? Please let us know your thoughts on this subject.