In been a few years, since Motorola played in flagship space. Motorola for the past couple of years had been focusing more on affordable phones. The phone manufacturer famous for its Moto Razr phone has also gained popularity in the affordable phone segment. It’s G, One, E and Z series are all relatively affordable phones and are quite popular. Since there were no flagship phones from the company for a while, everyone including the competitors seemed to think Motorola is out of the flagship segment now. But, Motorola wanting to prove them wrong, has brought its A-game and launched a new series of phone worthy of flagship title.

Starting with the design of the phone, Motorola Edge Plus has a glass sandwich design with glass on the front and back and frame in the middle. The right side of the phone sports a volume rocker switch and phone unlock switch. On the bottom, right at the center is a USB Type-C for charging/connectivity, and just to the sides are a SIM card slot and speaker. Talking about the speakers, the speaker found on the bottom is not the only. The earpiece on the top acts like a speaker when playing contents, making the phone a stereo phone. Another important feature that the phone has, which many others nowadays don’t, is the 3.5mm audio jack. Motorola Edge Plus comes with a 3.5mm audio jack and is placed at the top of the phone. 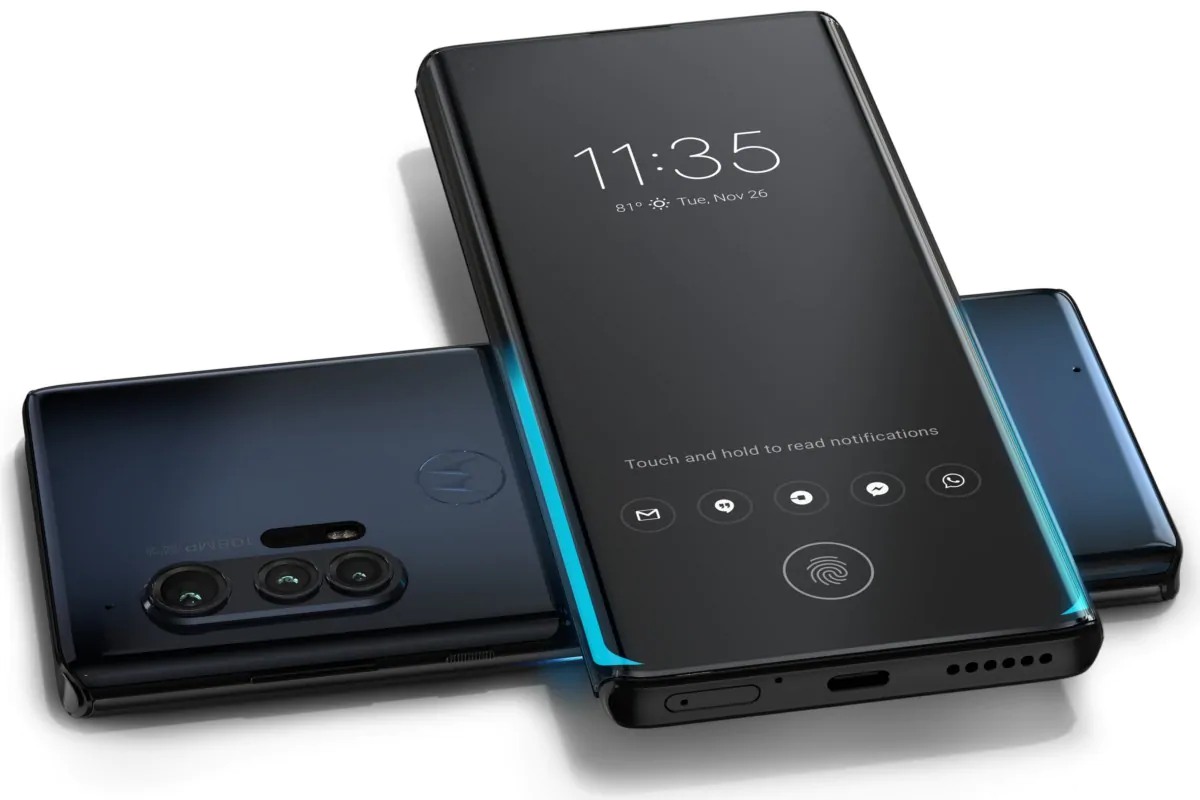 There is more, the panel used in the phone is an Edge display, hence the name of the phone. The edge display used in the phone is not very extraordinary but features implemented by the company make it one. The phone when placed face down will light up when there are notifications, calls, or alarms, alerting the users. The edge of the phone also has virtual shoulder buttons for playing games, that require those additional buttons. Tap feature is also present for the edge display, which either allows the phone to turn on/off the edge display or go back to the previous app. Lastly, the display also features an in-display fingerprint sensor, for keeping the device secure.

As for the cameras, Motorola Edge Plus features one of the best camera sensors available right now. It seems like, Motorola has collected the best specs from all the latest smartphones and has integrated into one, making the Edge Plus monstrous of a phone. If this is what Frankenstein monster looks like, competitors should be very scared right now. 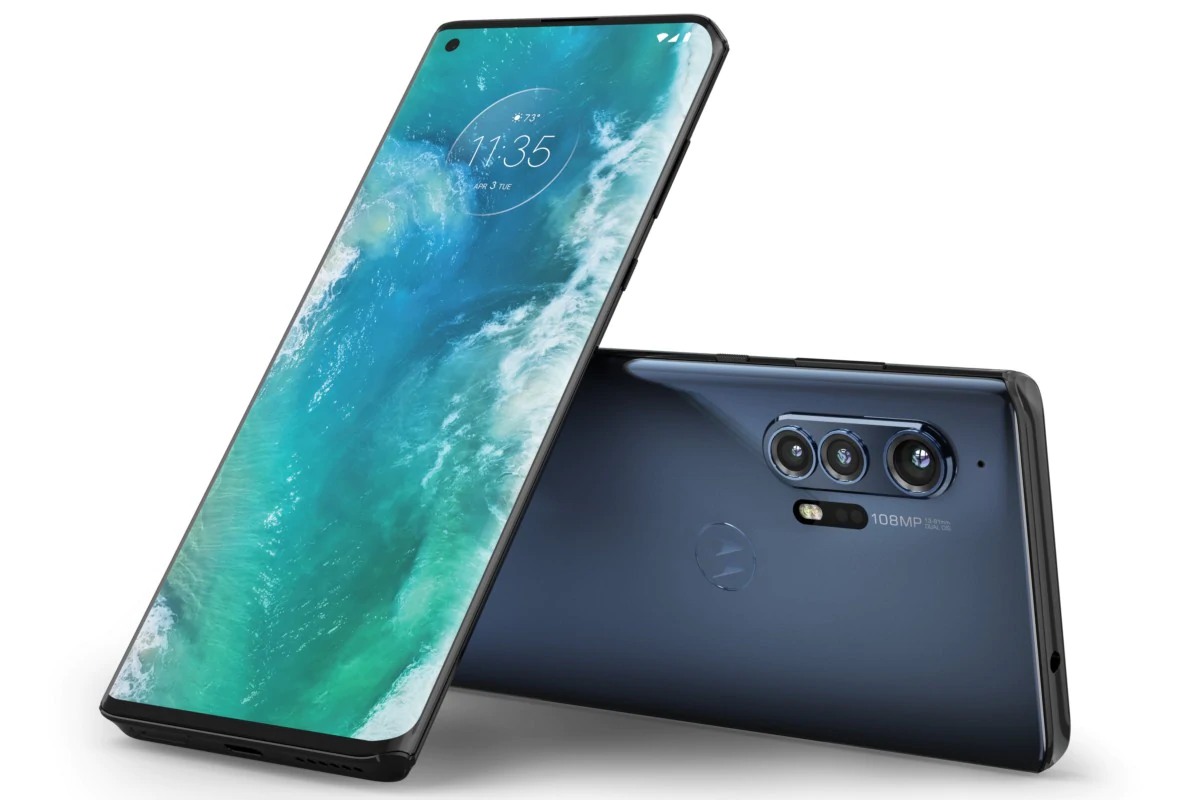 The device sports a 108MP f/1.8, wide sensor as its primary camera which supports pixel binning technology. Using the pixel binning tech, the Edge Plus is capable of taking 27MP high-quality images. Accompanying the main sensor are three secondary cameras; 8MP, f/2.4, 81mm telephoto sensor, 16 MP, f/2.2, 13mm ultrawide snapper, and a 3D TOF depth sensor. The telephoto sensor is capable of up to 3X optical zoom. The phone is also capable of recording videos of up to 6K@60fps or a normal 1080p@30/60fps videos. For the selfie, there is a 25MP f/2.0 camera placed inside a punch-hole situated at the top left side of the display.

Powering the device is the latest, most powerful processor by Qualcomm, the Snapdragon 865 SoC. The phone also comes with an impressive 12GB of RAM and 256GB fast UFS3.0 internal storage. The card slot for storage expansion is absent from the device. Moving forward, taking care of the graphics is the Adreno 650 chip and the phone is also 5G ready. The company claims the phone to be one of the fastest users can get in the market and works on both sub-6 as well as mmWave frequencies.

The Edge Plus runs on Android 10 out of the box with no skins on top. For battery, the devices come with a massive 5000mAh cell and is said to have good battery life. With this impressive battery, the phone is expected to last up to 2 days in a single charge. The battery also supports 15W Fast charging, 15W fast wireless charging, and 5W reverse wireless charging. Additional features of the phone include Wi-Fi 802.11 a/b/g/n/ac/ax support, Bluetooth 5.1, GPS, accelerometer, gyro, proximity, compass, and barometer.

Finally coming to the pricing, the Motorola Edge Plus is priced at $999 in the U.S. and is Verizon exclusive right now. Meaning there is no unlocked version available outside the U.S. The phone is expected to be launched in other parts of the world as well. But there is no information on the exact launch date and places to be launched yet. We will update this article as soon as the phone gets released in other parts of the world as well as the pricing. If the phone gets launched in Nepal, we expect the Motorola Edge Plus price in Nepal to be around NPR. 1,20,000. The Motorola Edge Plus will be available in two color variants: Smokey Sangria, Thunder Grey.