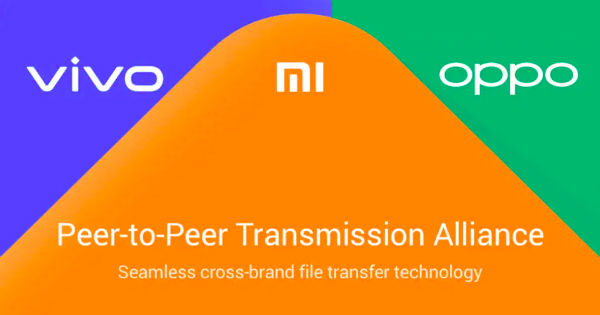 There are a lot of Chinese smartphone makers who are dominating the market right now and ha been challenging Apple and Samsung head-to-head. Chinese smartphone makers even make rivalry with each other to bring the best smartphone at a reasonable price. Companies like OnePlus, Huawei, Vivo, Oppo and Xiaomi have been carrying this rivalry and challenge for a long time now. But this time around three of them; Oppo, Vivo, and Xiaomi have formed a partnership in August 2019 in China to introduce “Peer-to-Peer Transmission” which would make user wireless file sharing experience better.

Peer-to-Peer Transmission feature has been announced globally and is now available to use in Xiaomi phones and Oppo phones. Whereas this feature will only be compatible in Vivo phones in the month of February 2020. Currently, the feature is supported only in India and other few countries where the sales of these companies are higher, but over time the supported countries list will add and the feature will be able to use globally.

What is Peer-to-Peer Transmission and how will it work?

Peer-to-Peer Transmission is a feature that will allow users to transfer and share data such as photos, videos, document files or any other file without internet connection but will rather use Wi-Fi Direct and Bluetooth.

First of all, the feature will be using Bluetooth to scan devices and after pairing devices the feature will be using Wi-Fi Direct to share and transfer files. This Peer-to-Peer feature is able to transfer files and data at an average speed of 20mbps. This feature is a lot similar to AirDrop which is used to transfer data and files between iOS and macOS devices.

In which phones will Peer-to-Peer Transmission work?

As for Vivo, this feature will be only available on their phones in the month of February 2020. They currently don’t have apps on their devices like Oppo and Xiaomi, so that may be the reason and Vivo might introduce their new app which would make their phone support Peer-to-Peer Transmission feature.

Oppo, Xiaomi and Vivo are also welcoming other Android smartphone manufacturing companies to join the alliance which would make their users feel easier to transfer/share data and files across mobile devices.