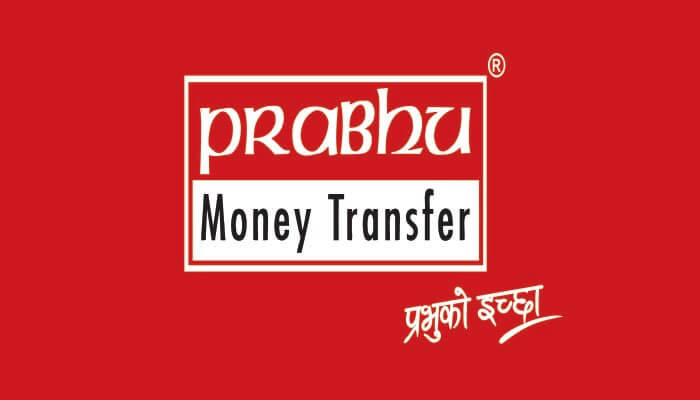 Information and the user’s data is the most precious factor in the current world. Any breach of data can lead to huge conflicts. User’s data and privacy must be maintained by the respective organization. Any distribution of such private information will be against the law. Previously a hacker named, Narpichas leaked 1,76,519 Vianet user’s data. These data included the user’s email address, phone number, and address. These data were on the dark web with onion URL. Now we have another similar case. A twitter user by the name Cyber_hell_god (SATAN) tweeted a post warning Prabhu Nepal. 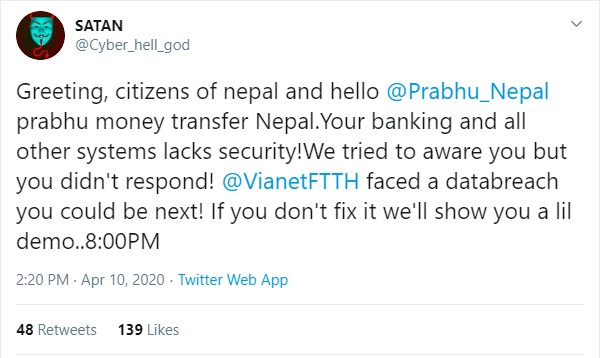 The twitter user Cyber_hell_god (SATAN) tweeted a post stating, “Greetings, citizens of Nepal and hello @Prabhu_Nepal  Prabhu money transfer Nepal. Your banking and all other systems lack security! We tried to aware you but you didn’t respond! @VianetFTTH faced a data breach you could be next! If you don’t fix it we’ll show you a lil demo..8: 00 PM”.

Not only the warning, but Cyber_hell_god also posted 10,000 crypto users email and password. On the topic of data breach, on Cyber_hell_god retweeted the tweet of Prabhu Nepal of October 19, 2016, that revealed the data of lucky draw contest.

Following this matter, Prabhu Nepal tweeted a post stating, “We apologize for this inconvenience that happened in 2016. This page isn’t actively maintained by the organization and is something an individual created and posted. We want to assure you that nothing as such as happened since then.” 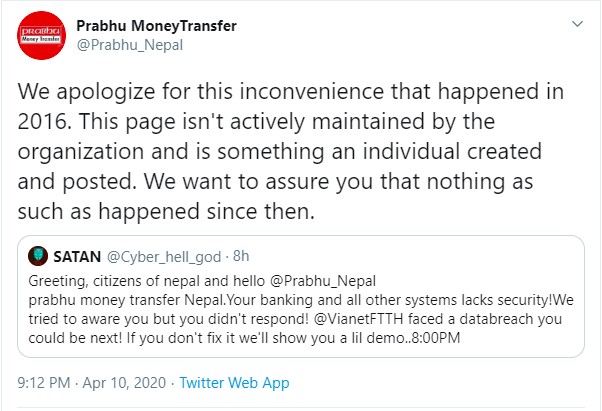 They also deleted their October 19, 2016 post that was retweeted by Cyber_hell_god.

There has been speculation going on that the previous hacker ‘Narpichas’ the Cyber_hell_god are the same user. But we are not sure. Nothing has happen so far as Cyber_hell_boy has not tweeted anything on Prabhu Nepal. We request all the users to keep their data safe with a secure password.

The tweets from Cyber_hell_boy and the Prabhu Nepal has been removed while the Cyber_hell_boy’s account is suspended. But he is back with a new twitter account with the username satan_cyber_god. With the new account now he is targeting Nepali Congress. 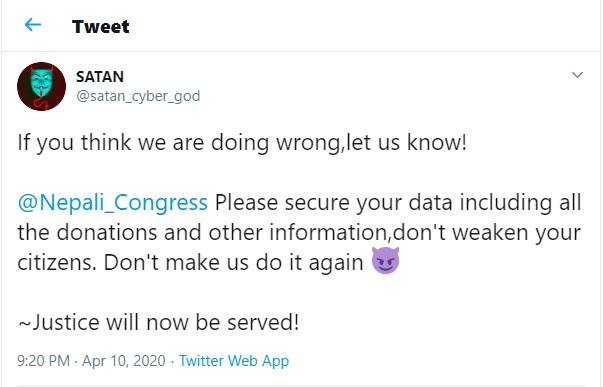 Somebody did ask satan_cyber_god if he is narpichas (previous Vianet Data Breacher) and his reply was No’.

As the hacker stated in his previous post regarding the demo, he posted saying, “As I said this is just a demo! I am just informing everyone how weak or system is! This is not a breach!”. 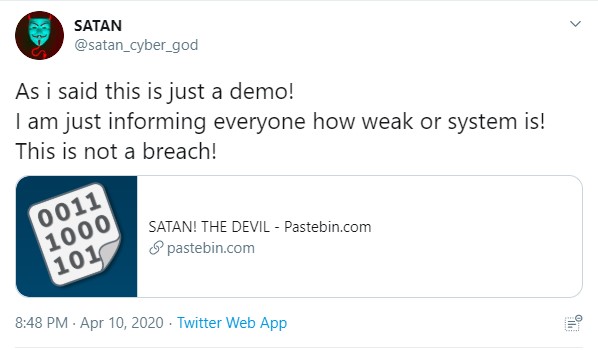 Stick with us for the update on this subject matter.