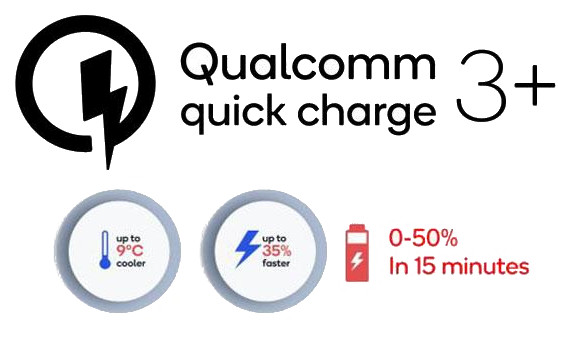 Qualcomm is a big name in the smartphone industry. Many manufacturers use Qualcomm chipsets in their smartphones. Even though Samsung and Huawei shifted to their own processors, the majority of the users and manufacturers still prefer silicons from Qualcomm. The chipsets built by the company are considered superior among other chipsets making it very popular. But many of the users don’t know, except processors, Qualcomm also builds many other services related to wireless technology.

One feature that many seek in their phones nowadays is the quick wireless charging. Connecting wire to charge a phone is a hassle and wireless charging solves this. All the user has to do is place the phone with wireless charging to the charging pad. There are different charging technologies used today and Qualcomm has recently launched a new one, which the company is calling Quick Charge 3+.

Basically, Quick Charge 3+ has a similar output of Quick Charge 4 technology with a similar 0% to 50% charge time of 15 minutes. It will be available on Snapdragon 765 and 765G chipsets as well as other mid-range SoCs launching later this year. While the Quick Charge 4+ technology is meant for flagship phones featuring higher-end chipsets.