Samsung is all set to expand its M series. Not so long ago, Samsung released its addition to the M series, Galaxy M31. Now Samsung looks all ready to expand it more with the release of Galaxy M21. Galaxy M21 is officially announced. This device packs quite impressive features. It has a triple rear camera setup, fast charging, monstrous battery, and many more. Galaxy M21 is a mid-range series that will definitely give run for money to other smartphone brands. The Samsung Galaxy M21 price in Nepal is  Rs 22,999 for 4/64GB and Rs 27,499 for 6/128GB. 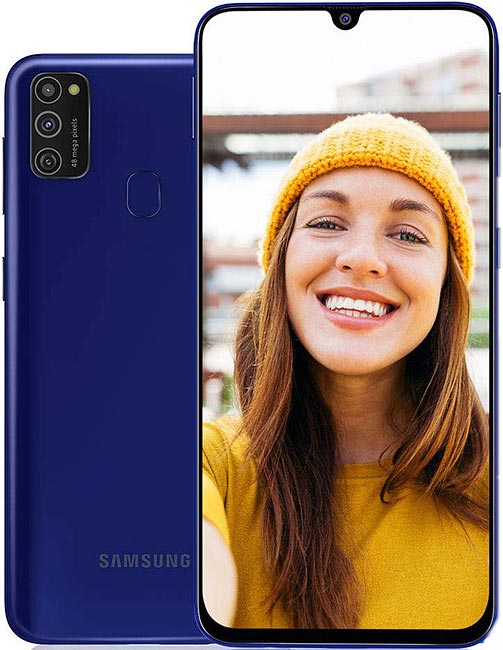 Talking about the device aesthetics, both the power button and the volume rockers are placed on the right edge of the device. On the display, there’s a waterdrop notch with slightly visible chin on the bottom. The fingerprint sensor is on the mid-back. We are glad to let you know that there’s a 3.55mm headphone jack placed on the bottom edge alongside loudspeakers and the charging port.

The internal memory is expandable using microSDXC.  Monstrous 6000mAh battery will fuel M21. Not only that, but it also supports 15-watt fast charging. For the charging port, we obviously have standard USB Type-C. Other features like accelerometer, gyro, proximity, compass, and many more are packed under the hood of M21. Midnight Blue and Raven Black are the available color variants.

The Galaxy M21 looks impressive for a mid-range device. The monstrous 6000mAh battery, triple camera setup, Super AMOLED display, and many more are packed under the hood of this device. The price of Galaxy M21 in India is INR 12,999. This device will be available for purchase from 23 March in India. Finally, this device is available here for purchase. The Samsung Galaxy M21 price in Nepal is  Rs 22,999 for 4/64GB and Rs 27,499 for 6/128GB. If you are seeking more options for smartphones in Nepal under Rs 25,000 and Rs 30,000 then please read, ‘Best smartphones to buy in Nepal under Rs 25,000 and Rs 30,000‘. Stick with us for the price and availability of Galaxy M21 in Nepal.