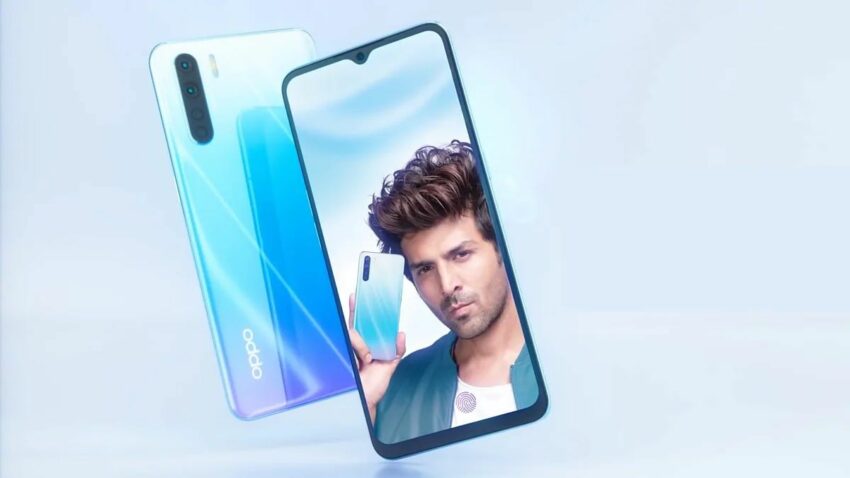 With the introduction of Enco Free, Oppo made themselves enter to wearables department and also successfully launched the “Peer-to-Peer Transmission” feature in partnership with Xiaomi and Vivo. This partnership doesn’t mean the rivalry is over. Xiaomi came up with Redmi 8 Pro whereas Vivo came up with S1 Pro, in order to maintain the rivalry on the smartphone market, Oppo Nepal has finally launched its F15 smartphone in the market. The price of Oppo F15 price in Nepal is Rs 39,990.

Oppo F15 comes with 6.4-inch FHD+ AMOLED display with a resolution of 2400x1080p. This beautiful display also houses a water-drop notch where its front camera resides and an under-display fingerprint sensor which can unlock in 0.32s2. Gorilla Glass 5 protection is layered in this display to prevent it from scratches and cracks. DC Dimming 2.0 also protects your eye from blue light while watching videos/movies or playing games.

The bezels around the display is pretty thin at the sides but kind of thick at the bottom. The power button is placed at the right edge whereas volume rockers are placed at the left edge. 3.5mm traditional headphone jack is also found on the phone. At the back, we can see a Quad-rear camera setup at the top left corner of the phone all aligned vertically supported by an LED flash placed just side at it. On the bottom left, a company logo is placed vertically. The finishing is very shiny and glossy at the rear panel with some textures that make the phone look shinier.

The camera is one of the main highlights of this phone, we get AI Quad-rear camera setup; 48MP main sensor, 8MP ultra-wide-angle sensor, 2MP macro sensor, and another 2MP depth field sensor. This setup uses 4-in1 pixel combination technology that provides sharp detailed images even in low light conditions. New AI Beautification Algorithm is integrated into this device which lets you take beautiful Portraits, Night Portraits, Portrait bokeh effect, and Portrait HDR. This setup can also record videos with Anti-shake enabled to give you shake-free filming.

Coming to the front camera, F15 houses a 16MP camera sensor that can shoot nice selfies with a great skin retouch while still keeping the details of the image. This front camera is also able to snap selfies in HDR and Portraits.

Oppo F15 equips Mediatek Helio P70 chipset (similar to A91), Octa-core processor, Mali-G72 MP3 as GPU, and 8GB RAM which all runs on Android 9.0 Pie skinned with ColorOS 6.1. Getting the latest Android 10.0 software would have been much better. This 8GB RAM will be combined with 128GB internal storage which can be expanded up to 256GB via dedicated microSD card slot. F15 is only going to come in one storage variant; 8GB/128GB which is kind of unsatisfying. The chipset and GPU in combination with Game Boost 2.0 can give you really nice smooth gaming performance with no lag/control issues.

F15 is packed with Li-Po 400mAh battery which also supports VOOC Flash Charge 3.0. VOOC Flash Charge 3.0 is basically a 20W Fast Charge support in easy words to say and can juice this battery from 0-50% in just 30 mins which means 0-100% in 1hr. You can get 2hrs of talk time with just 5mins of charge. This 4000mAh battery can go through a day and while in heavy use if the juice drains, you can charge it up pretty quick.

Oppo F15 has finally made its way to the Nepali market. The AMOLED display,  8GB of RAM, 48MP rear quad-camera, 20-watt fast charging all are packed under the hood of Oppo F15. Not to mention the reason, Oppo is quite popular in Nepal and its consumers are large in numbers. The price of Oppo F15 in Nepal is Rs 39,990. It will come in two color variants; Lighting Black and Unicorn White.

Next up in Line: