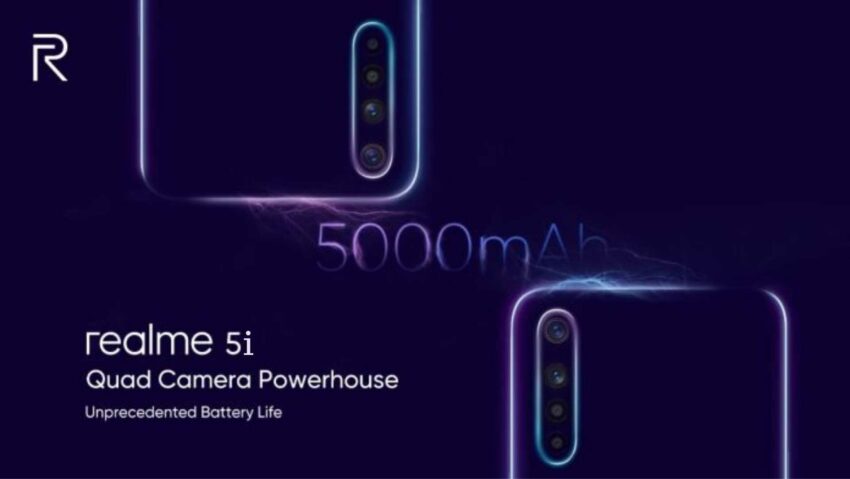 Realme 5i was already announced in Dec 2019 and is a successor to Realme 3i which was launched back in July 2019. Now Realme has launched another entry-level phone in the budget segment this year around to challenge Xiaomi and Vivo as they have introduced a lot of budget phones lately. Realme 5i launched in Vietnam on Jan 6, 2020, whereas in India it launched on Jan 15, 2020. And now Realme Nepal has finally announced and the price of Realme 5i in Nepal is Rs 20,990 (4/64GB).

Realme 5i comes with a 6.5-inch IPS LCD display with a resolution of 720x1600p. This display is house to a water-drop notch placed at the middle top of the phone. This display might get the job done even on bright sunny days.

The design of the Realme 5i is very similar to Realme 5. The overall build o the phone will be plastic and is rumored to feature Splash resistant feature which will be a good addition on the phone. The bezels are thin around the display but feel a fit thick at the bottom part. The power button is placed at the right edge whereas volume rockers on the left edge. The phone surely has a 3.5mm headphone jack and a MicroUSB 2.0 port.

Looking at the tweeted image we can see the quad-camera setup all aligned vertically at the top left side of the phone supported by an LED flash. A finger-print scanner mount is placed at the middle and a company logo at the bottom left placed vertically. The finishing at the back is very shiny and glossy. The rear panel of the phone is very eye-pleasing. The round edges will surely make the phone comfortable to hold in hand.

As for the camera department, Realme 5i sports an 8MP camera sensor at the front for selfie shooting fitted in the water-drop notch at the top middle of the display. This camera sensor will also be able to record videos in 1080p at 30fps.

At the rear side, Realme 5i features a quad-camera setup; 12MP main sensor, 8MP ultra-wide lens, 2MP, macro lens, and another 2MP depth field sensor all supported by an LED flash. This setup can also record videos in 4K at 30fps and 1080p at 30fps. Getting a quad-camera setup and an 8MP front camera in an entry-level budget phone is very pleasing and this camera setup may be the reason why users will want to buy the phone.

Realme 5i is equipped with Snapdragon 665 chipset, octa-core processor, Adreno 610 as GPU, and 3GB or 4GB RAM to deliver performance. All this will be running on Android 9.0 Pie skinned with ColorOS 6. The phone will also offer storage variants like 3GB/32GB and 4GB/64GB which both will have storage expansion options up to 256GB via microSD card.

Realme 5i’s main highlight is the gigantic battery that it packs inside. The battery is of 5000mAh battery (Similar to Redmi 8, Realme 5 and Realme 5s). Sounds gigantic right, it will also have support a mediocre 10W battery charging to juice up the battery. This battery can easily last up to a day, no matter what you’re doing. The battery size that Realme has put into this phone is really amazing.

Realme 5i Price in Nepal

Maybe it’s high time Realme Nepal acts responsible and price their smartphone rightly, else there are more capable phones such as Redmi Note 8 for the price under 20000 in Nepal. So what do you think of Realme 5i? Please let us know.