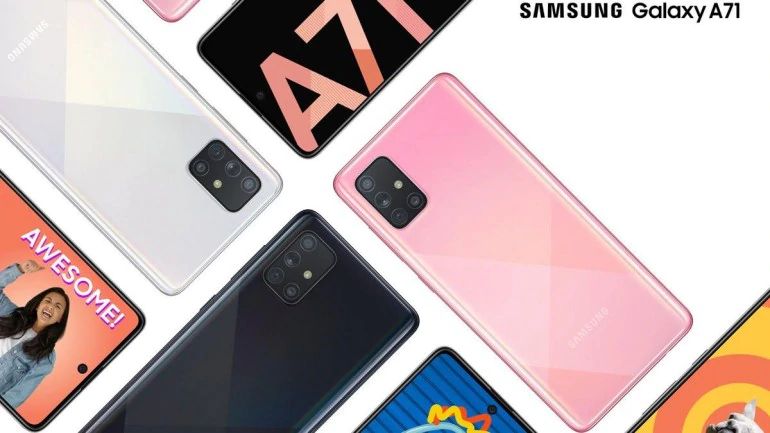 Alongside Galaxy A51, Samsung has also announced its successor “Samsung Galaxy A71”. Some of the features, specification ad whole designed has been revealed by the company but the price tag still remains a mystery. Just like Samsung Galaxy A51, the front part of the device feels similar to Note 10 series. Galaxy A71 surely comes with few upgrades over Galaxy A51, so let’s talk about those upgrades. The price of Samsung Galaxy A71 in Nepal is Rs 49,999.

Samsung Galaxy A71 features a 6.7-inch Super AMOLED display which is a bit larger than what its predecessor has. The display houses a tiny punch-hole in the middle which the company calls “Infinity O display”. The resolution that displays provides is of 1080x2400p and has layered glass protection of Corning Gorilla Glass 3 which keeps the display of the phone safe from scratches and cracks. The display also features an under-display fingerprint scanner for unlocking the phone.

Samsung sports an L shaped Quad rear camera setup supported by an LED flash which are all fitted into a rectangular shaped camera module found at the top left corner of the phone. The phone also has a good looking gradient color finish which feels appealing to eyes. The company logo is placed at the middle bottom of the phone whereas volume rockers and a power button at the right, 3.5mm traditional headphone jack, Type-C port, and a single speaker grill are placed at the bottom edge of the phone. The overall design of the phone is the same as Samsung Galaxy A51.

Samsung Galaxy A71 sports Quad rear camera L shaped setup at the back supported by an LED flash which are all fitted into a rectangular shaped camera module found at the top left corner of the phone. The Quad camera setup consists of 64MP main sensor which is an upgrade to Galaxy A71’s 48MP main sensor, 12MP ultra-wide-angle lens, 5MP macro lens, and another 5MP depth field sensor all supported by a LED flash. This setup can also record videos in 4K at 30fps and in 1080p at 30/240fps.

Samsung Galaxy A71 equips Snapdragon 730 chipset, octa-core processor, Adreno 618 as GPU, 6GB or 8GB of RAM and Android 10.0 skinned with One UI 2.0 as software. The storage options that are currently known are 6GB/128GB, 8GB/128GB and the variants may increase. The performance of the Galaxy A71 will surely be better than its predecessor because it has upgrades in terms of chipset and GPU.

To deliver power backup, the phone packs a giant 4500mAh Li-Po battery (Just like Redmi Note 8 Pro) which also supports 25W Fast charging. The battery and the 25W fast charging are also upgrades over its predecessors.

Samsung Galaxy A71 Price and Availability in Nepal

Samsung Galaxy A71 also comes in the same 5 color options same as Galaxy A51 which are Prism, Crush Black, Silver, Blue, and Pink. Only two storage options are available which are 6GB/128GB and 8GB/128GB but the storage variants can be further increased. This device has finally made its way to the Nepali market. The price of Galaxy A71 in Nepal is Rs 49,999. If you want to purchase a smartphone under Rs 50,000 please check out the article on Best smartphone to buy in Nepal under Rs 50,000.