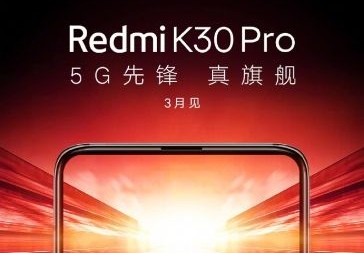 March seems a busy month for all of the smartphone lovers out there. Many of the brands have schedules in March to launch their phones like P40 series, Vivo Z6 5G, or Oppo Find X2. Likewise, Xiaomi is also set to launch its flagship phone the Redmi K30 Pro, the successor of the famous flagship killer the Redmi K20 Pro and the bigger brother of K30. Recently, Xiaomi via its Weibo account teased with the launch date of its upcoming flagship phone launch. The teaser photo in the post says see you in March (written in Chinese) but it doesn’t give the actual launch date of the phone.

The post has nothing much to go on about the device but the photo, on the other hand, is a different story. Looking into the teaser photo, we can see some juicy details about the device. First of all, there is no notch or punch-hole cutout on the display. This might mean the K30 Pro would feature an in-display camera. Sorry, for that, guess I’ve been watching too many sci-fi shows. The K30 Pro for real might feature a pop-up camera as the display is clean with no sight of notch or cut-out as seen on K20 Pro. But, Xiaomi did make a statement some time ago about the in-display camera mass production being a difficult task. Did they overcome the problems and are implementing the technology, only time will tell, but it’s unlikely.

On the hardware side, Redmi K30 Pro is expected to sport Qualcomm’s flagship SoC the Snapdragon 865 chip. Another noteworthy feature that the device will come with is 5G support. Xiaomi has not revealed the 4G version of the phone but we expect there will be one. Other known features of the phone include a more powerful camera, longer battery life, and more nuanced user experience, while still maintaining an “extreme price”. Except for all this, information on the device is scarce right now. But as the launch date is getting closer, we expect more information to follow. Stay tuned with us to know more.