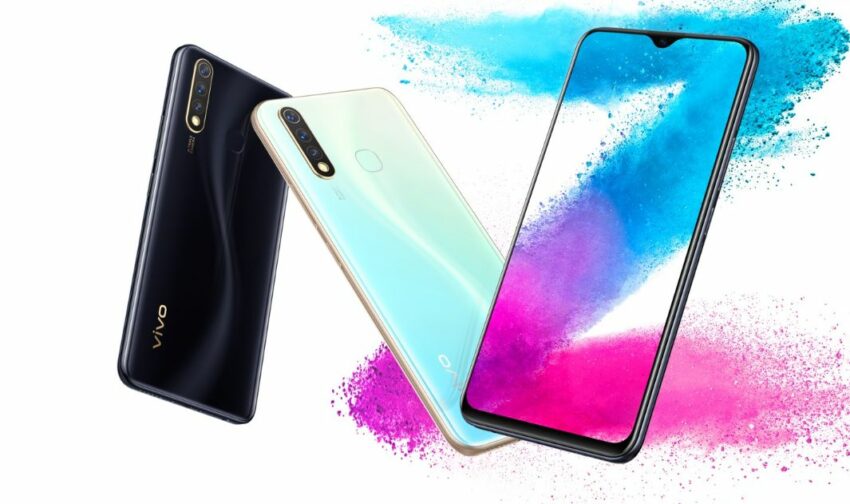 Vivo Z5i was launched in November 2019 and comes in the midrange segment. Vivo is known to offer a real good sleek design and a good finish to its phones from the budget segment to midrange segment and higher-end flagships. Vivo Z5i comes with a really sleek design and a good glossy finish at the rear panel. Vivo Z5i comes with a very good notch display, triple rear camera setup and a design that feels familiar to Vivo’s mid-range family. We speculated that the Vivo Z5i’s price in Nepal could be around Rs. 28,500 to Rs. 30,000 in Nepal after it arrives in Nepal’s market.

Vivo Z5i comes with a 6.53-inch IPS LCD display which also houses a waterdrop notch. The water-notch holds the selfie camera of the device. This IPS LCD display has a resolution of 1080x2340p and a 19.5:9 ratio. The display of Vivo Z5i quite brings, vibrant, well contrasted in terms of colors and a really good video resolution. The display can give the user a really nice experience when it comes to watching videos, watching gaming streams and playing games or doing graphics work. Overall the display of Vivo Z5i is very good.

Coming to the design, we can see a water-drop housed notched display at the front which also has really thin bezels at the side edges but a relatively thick looking bezel at the bottom which feels okay though. The back panel of the phone has a glossy shiny finish that feels pleasing to the eyes. We can see a triple rear camera at the top left side of the phone aligned vertically and supported by an LED flash. The cameras and LED flash are all fitted inside the camera module.

Vivo Z5i sports a triple rear camera setup which consists of; 16MP primary sensor (Just like Y19 ), 8MP ultra-wide sensor and 2MP macro lens which are all supported by an LED flash and fitted inside a camera module at the top left backside of the device.  We can’t understand why Vivo has a ditched depth sensor for the macro sensor. The camera of the Vivo Z5i performs really good but stills average. The camera is also able to record in 4K at 30fps and in 1080p at 30fps.

Coming to the front camera department, Vivo Z5i display holds a water-drop notch where its front camera of 16MP rests. This 16MP camera does a good job of snapping selfies and the beautiful features integrated into Vivo’s software beautifies the selfies while preserving the details. The performance of the front camera somehow feels better than the triple rear camera setup.

To deliver performance, Vivo Z5i is equipped with Snapdragon 675 chipset, octa-core processor, Adreno 612 as GPU and 8GB of Ram which all runs on Android 9.0 Pie skinned with Funtouch 9.2. The chipset is not the latest and in a mid-range phone, you’ll get it rarely but with few compromises. We can expect an average performance from chipset but a good performance form processor, GPU, and RAM.

The device may heat and may show signs of slowing down during heavy gaming and doing high graphics work because it has a low chipset and no sort of cooling system integrated but can carry out normal and mid tasks with ease and no lag. As for storage, Vivo Z5i offers only one storage variant which is 8GB/128GB which can be further expanded up to 256GB via microSD card slot.

Vivo Z5i packs a mammoth Li-Po 5000mAh battery (similar to Y11) which feels really huge for a midrange phone. On top of this mammoth battery, Vivo Z5i supports an 18W Fast battery charging which can juice up the mammoth battery at a decent pace. The mammoth battery can last through a day easily without worries even in gaming for hours or doing heavy graphics work. The battery and the juice it provides all-day through is really impressive and amazing to have.

As for connectivity, Vivo Z5i comes with all the necessary and common sensors found in a smartphone in addition to fingerprint scanner mount, Bluetooth 5.0, Active noise cancellation with dedicated mic, USB On-The-Go, microUSB 2.0 and 3.5mm traditional headphone jack port.

The price of Vivo Z5i is set at 230 Euros and CNY 1,798 in its home market China. This means that it will cost around INR. 18,000 in India after it arrives in the India market. So, we can speculate that the Vivo Z5i’s price in Nepal could be around Rs. 28,500 to Rs. 30,000 in Nepal after it finds its way from the India market to our Nepal’s market. However, there are still other phones which cost under Rs. 30,000 in Nepal and worth’s the price. The colors available for Vivo Z5i are Glazed Black and Jade Blue.