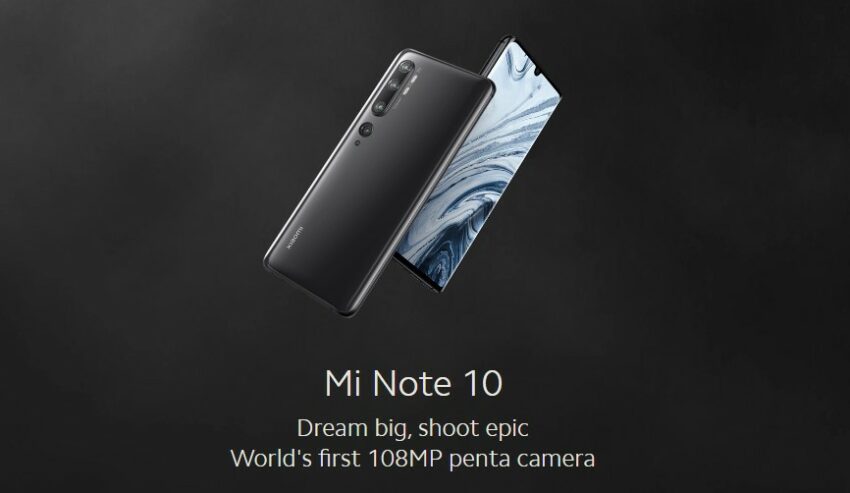 Xiaomi Mi Note 10 comes with a 6.47-inch HDR10 Curved Super AMOLED display which has a 1080x2340p resolution. This display goes up to 600 nits max brightness and features Always-on display feature. This display is also protected by Corning Gorilla Glass 5 which does its job really well. The display is really good when it comes to being vibrant, colorful and bright. This display feels really smooth and gives the user a really nice experience while watching videos, gaming or doing other tasks.

Mi Note 10 has a plastic build but also features an aluminum frame and Corning Gorilla Glass 5 layered protection at the back which makes it really solid. The overall design of the phone is very similar to the Huwaei P30. The button arrangements, the overall front look, and the upper edge design is really similar. At the top left side at the back of the phone, we can see a Penta rear camera setup all aligned vertically supported by a Quad-LED dual-tone flash. In the camera setup, 3 camera sensors can be seen inside a vertical module whereas as other 2 just below the module. Xiaomi has used a curved display in this smartphone which is the first time Xiaomi has ever used it in a smartphone. The overall design is quite pleasing and feels really great while holding in hand.

Xiaomi has integrated a Penta rear camera setup in this smartphone which is ludicrously good. The Penta rear camera setup features a 108MP main sensor (Just like Mi Mix Alpha), 12MP 5x telephoto lens, 5MP 2x telephoto lens, 20MP ultra-wide-angle lens, and 2MP macro lens all supported by a Quad-LED dual-tone flash. This camera setup takes ludicrously good high-quality photos and has been renounced as the best camera in phone by many YouTuber’s. The portrait mode, ultra-wide mode, up-to 50x zoom, Night Mode and macro shots are in a league of their own. The color range is not as dynamic as Samsung Galaxy Note 10+ but captures relatively better natural and high-quality photos.

This Penta camera setup produces photos up to 12032×9024 which is 12 times as high as 4K resolution and even is mightier than Galaxy Note 10+ and Huawei P30 which was released as a photography phone.  Every photo that Mi Note 10 captures feels very natural, cinematic and high quality. This setup is also able to record videos in 4K at 2160p at 30fps, in 1080p at 30/60/120/240fps and in 720p at 960fps. The video recording in this phone is very much like DSLR type and also a Vlog mode which records shareable small videos with transactions and saves or time in editing.

Coming to the front camera department, Mi Note 10 offers a 32MP front camera which does a really good job. The camera feels really good and produces high-quality images. The skin smoothening and beatifying features works really well while preserving the natural details. This camera sensor is able to record videos in 1080p at 30fps which might be more than enough to most of the people. The overall camera performance of the device is really nuts and can’t be compared to other devices in terms of camera. Mi Note 10 rises above all other smartphones in terms of camera.

Mi Note 10 features a Snapdragon 730G chipset, octa-core processor, Adreno 618 as GPU all supported by 6GB of RAM and which all runs on Android 9.0 Pie skinned with MIUI 11. In terms of performance, Mi Note 10 goes into an upper mid-range zone. The device lags a bit while doing heavy multitasking and takes time to load and process high-quality photos after capturing it. The device can run every trending game in a smooth frame rate but heats while playing for a long time or doing heavy gaming. The performance that Mi Note 10 delivers really gives a mid-range feeling. Mi Note 10 only comes in 1 storage variant; 6GB/128GB and doesn’t even provide expanding storage option because of the exclusion of microSD card slot.

Don’t miss: Xiaomi Mi A3 Quick Review, Should you buy this Android One smartphone?

As for Connectivity, Mi Note 10 comes with all the necessary and common sensors found in a smartphone, multi-functional NFC, Type-C 1.0 reversible connector, in-display fingerprint sensor, and 3.5mm headphone jack port.

Mi Note 10 is currently selling out at 450 Euros in European countries and in $605 USD in America. After it launches in India the speculated price of this smartphone in India could be INR. 43,500. Sooner or later it will surely hit Nepal’s market after it gets successfully launched in India. Xiaomi Mi Note 10 price in Nepal could be around Rs. 70,000-75,000 as per our speculations. However, there are other phones in Nepal’s market Under Rs. 50,000 those worth the price. The available color variants to buy will be Aurora White, Glacier White, and Midnight Black.