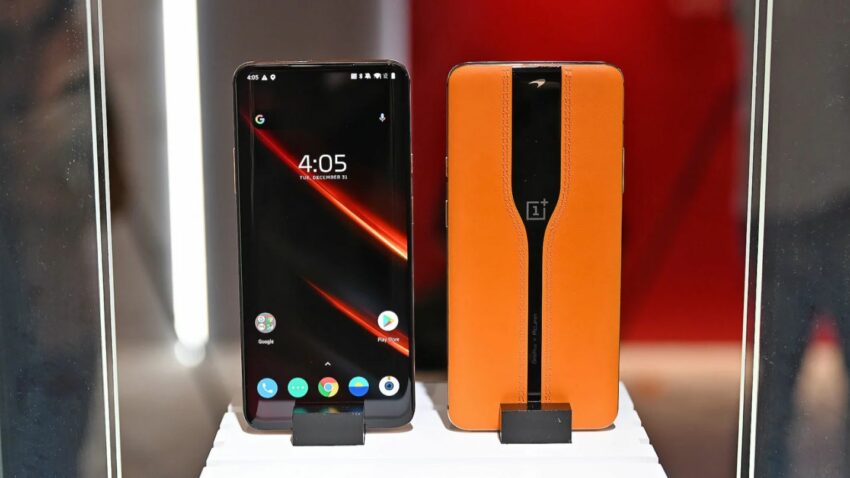 OnePlus had been keeping its fans waiting after they announced their first-ever concept phone back in the month of December 2019. Now curtains have been rolled up, OnePlus has unveiled its first-ever concept phone named “OnePlus Concept One” at the CES 2020 event. The rumors were that the concept phone could be a foldable phone like Moto Razr (or revolutionary Escobar Fold 1) or even a dual-screen phone like a Surface duo. OnePlus has shut all these rumors down and introduced a concept phone in partnership with McLaren which looks the same as OnePlus 7T Pro from the front but has interesting stuff at the rear panel.

First of all, talking about the fascia, the bezels look very thin and the display feels the same as OnePlus 7T Pro. We have a set of volume rockers at the left edge and a power button along with another button which can work as a dedicated button to activate integrated voice assistant or even go to silent mode at the right edge. At the bottom edge, there’s a SIM tray, Type-C port, and a speaker grill. 3.5mm headphone jack is nowhere to be seen.

The build of this phone seems pretty solid. The frame of this phone is built with PVD aluminum which gives the phone a shiny and solid look. But this PVD aluminum isn’t ready to be used in other phones nor is it able to be available in the market right now. But it may feature in other phones in the near future on flagship phones. At the back, we can see an “Orange Papaya” colored leather casing which looks very beautiful and attractive. This is the same leather that McLaren uses in its car’s interior, so yeah, it is of top quality.

This beautiful leather has a stitched style that runs from top to bottom of the phone from the middle and outlines the camera setup that disappears. You heard me right, the rear camera setup of this phone disappears and appears only when you’re using it. Along with the camera setup, we can see a McLaren logo at the top, OnePlus logo at the middle and both OnePlus and McLaren written logo in the bottom which is placed vertically that shows the partnership of two companies.

OnePlus Concept One Disappearing Camera: Behind the Scenes

The disappearing cameras secret is the glass that is above the camera setup and where are the logos are placed and written. This is not a normal glass but rather an “Electrochromic glass” which is normally used in Airplanes and McLaren cars. And the ‘Electrochromic glass’ setup isn’t just one glass but has a total of 5 layers. Two layers are placed above as well as two layers are placed below and between them in the middle is an electrochromic layer. Not just this but OnePlus even has added specialized non-polar glass particles to provide these layers of glasses with more structural support.

Basically, this electrochromic glass can change its opacity which can make the camera visible and invisible which is placed beneath it. Normally the glass is black, but when the camera app opens, the electric charge is sent to the electrochromic glass which results in making it transparent showing the camera and enabling it to take photos and videos. When the app closes the electric charge is stopped and the glass again goes to an opaque state. Not just Opaque and transparent state, these glasses can even go to semi-transparent state also.

OnePlus Concept One phone is only a concept phone and probably will never hit the market but there is a possibility that we can see these electrochromic glass feature in future OnePlus flagship phones or even in other companies’ phones. But anyway, we would like to see that Orange Papaya leather casing in other phones as well and OnePlus might be planning to feature it in its next upcoming phones even in OnePlus 8 series, who knows? Concept Phones are basically just for showcasing and sending silent messages to audiences and other companies that they can do cool stuff to.

Stay tuned and we will be updating more about CES 2020.