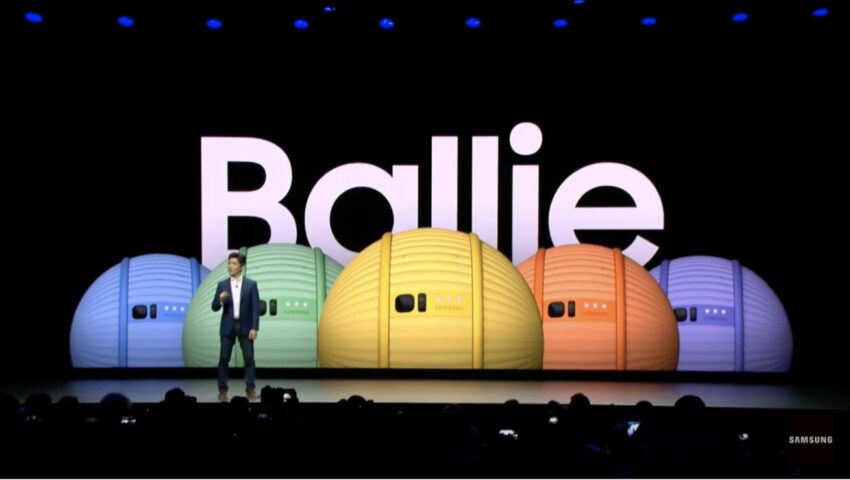 Last year in CES 2019, Samsung introduced a bunch of robots with AI integration, this time it’s no different. At CES 2020, Samsung has introduced AI integrated GEMS and a small mini-sized ‘BB-8’ — Star Wars fans know what we’re talking about — like robot named “Samsung Ballie”. Ballie has become one of the headlines since it was shown by Samsung’s Co-CEO H.S. Kim at the CES 2020 event.

During the event Co-CEO H.S. Kim made Ballie follow his orders and instructions. He also demonstrated how Ballie gives robotic chimes when it took orders and after it completed the task. Ballie even followed H.S. Kim and even went to his hands when he called, just as if a living pet would do when you would call by its name.

#Ballie is part of the next evolution of #IoT – patrolling your home, acting as a #fitness assistant, and acting as a remote control for the smart devices in your home. #CES2020 #SamsungCES2020 pic.twitter.com/u1Phkpy3Eb

Watching Ballie doing these things made us think as if we BB-8 has come into real-life play. Let’s talk about Ballie more.

Ballie is round and a little bigger than a tennis ball to say. The ‘BB-8’-like robot has two straight-line running on its surface that would separate the sides from the middle section where Ballie houses a camera sensor and an additional sensor aligned vertically. Well, this reminds of Samsung Galaxy S7’s rear camera setup. Just along with it, there are three dots, which can be LED flash or just indicators aligned horizontally and below that is a company logo.

The way Ballie movies around is through its separated sides which rolls. The middle doesn’t move unnecessarily but it can move its middle part with ease and great flexibility as well. Ballie is integrated with AI which makes it intelligent and also is packed with different kind of sensors that helps Ballie to recognize a person, animal/pet, objects, smart devices, and the list goes on. H.S. Kim even claimed that Ballie is held to “Stringent data protection and Privacy standards”.

The robot is designed to be a home companion for you, for your pet when you leave home or for your children. In a teaser video released by Samsung, they showed that Ballie automatically wakes and starts surveying the house, which means that it has an ‘auto-wake on a specific time’ feature. Furthermore, the robotic ball slides the curtain, rings the alarm to wake up the owner, turns on the TV for the pet and even activates a Roomba-like vacuum to clean up the mess. The video clearly depicts Ballie is a one-for-all home companion that connects and communicates with all the IoT smart-devices at home.

The Live Video sharing ability across devices of Ballie was also shown to be amazing. First Samsung will design its own eco-system software for its smart home appliances which can connect to each other with various appliances and Samsung devices.

Samsung Ballie’s availability in the market, its price, its sensors that its packed with and other specifications haven’t been revealed by the company yet. The company still may be working on security tasks that Ballie can carry out, like calling or messaging your closed ones along with location when you’re in danger, fire alerts and others. Or, Samsung may even give Ballie a voice to make it more attractive, but one thing is sure that Ballie will still come with more additional features integrated into it. However, the color options have been showing to us which are; Yellow, Blue, Green, Red, and Gray.

Not just on smartphones and wearables, these things we saw at CES 2020 from Samsung show us that Samsung is also working on other different smart home projects and robotics to make our daily life better, easier, more automotive and carefree. CES 2020 isn’t finished yet and we wish to see more innovative stuff, so stay tuned with us and we will be updating to you.