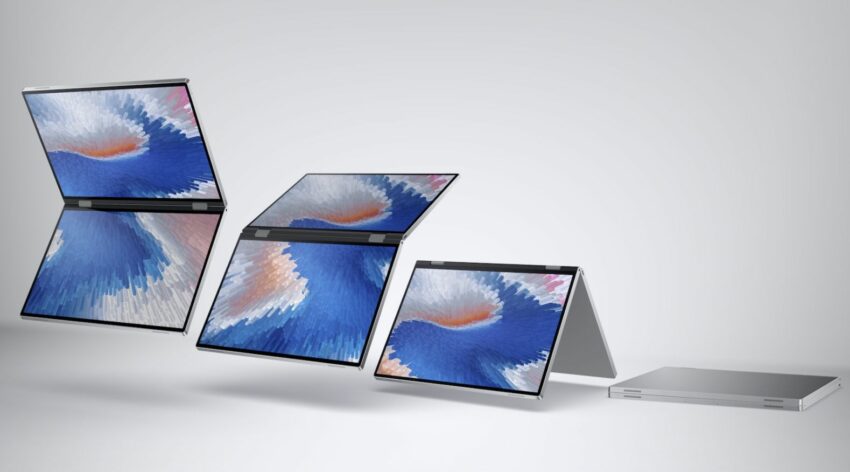 Dell has unveiled its experimental dual-screen laptop’s prototype which the company has named “Dell Concept Duet” at the CES 2020 event. As the name suggests, Duet means duo or a team of two to say. In this device there’s a team of two display, yes you heard me right ‘two display’. Till now we had only witnessed dual-screen laptops (like Surface Neo) from Microsoft, Lenovo, Intel, and more. Now, for the first time, Dell is on it too.

This unveiling came straight out of the blue from Dell. The dual-screen laptop feels very futuristic at first glance. Not just for phones but it seems as the future of laptops is even on foldable and dual-screen.

Dell has fitted two 13.4-inch display in this device. These display even folds like a traditional laptop and the displays are only separated by a 360-degree hinge. Dell Concept Duet laptop’s prototype looks as if its XPS 13 laptop whose keyboard is replaced with a second display. You can perform separate tasks in separate displays or you can even use a combo of both display to display one specific task.

At first glance, looking at the display, we can quickly notice bezels around the display and the display itself seems to be a top-class performer. The display seems very clear, bring, sharp, colorful and well contrasted. This duet display feels even amazing when we just look at it.

Dell has even integrated their own built-and-developed Magic software into this device because, yeah, Windows has still to catch up with dual-screen tech. But in the near future, Microsoft may update its Windows which would support such devices. Nevertheless, Dell’s integrated Magic software can read gestures like a three-finger gesture will send an app from one display to another and a four-display gesture would stretch an app on both devices giving the user a massive display for single-tasking.

Other specific information like its display resolution, processor, graphics, and RAM hasn’t been told by the company yet and is meant to be kept confidential. All they said was that this laptop is a prototype and its hardware is pretty much ready, but the software is a problem. Microsoft is working on Windows 10X to solve the problems of such devices. The company even said that the final product could launch around the end of this year 2020 but don’t get your hopes high because as the name suggests, it’s a “Concept” device, which means it might never make into real life. However, if it ever comes into production, the waiting will be real for Dell enthusiasts.